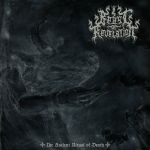 Formed in the Netherlands by musicians that were once involved with bands like ASPHYX and BEYOND BELIEF and trying to recapture the glorious sound of the extreme Doom / Death that those lands were known for in the 90s, with the help of a legend in the name of John McEntee from INCANTATION on vocals, this is the debut album that is sure to please those fans of extreme Doom / Death Metal. But in any case, I am afraid that even with those big names in there, this BEAST OF REVELATION comes out not as menacing as one would expect. There was plenty of Doom / Death Metal in the 90s in those lands, basically in the same style, yet there was always an injection of some faster parts to make the sound of gloom more violent. In this case nope, nothing. It is all slow riffs, and the monstrous vocals of Mr. McEntee, but everything comes out sounding a bit monotonous at the end. Those who can bypass that this is just doom and gloom all the way will find some creepy riffs and wicked small doses of melody for the end of times, not far away from WINTER and some of the slower parts of AUTOPSY. Yet, after a few listenings I still find that this needs something more to be more “exciting” to say a word. The very, but very slow tempo is not something that I am attracted to, and to play at that tempo and to be quite interesting most of the time, proves to be very hard, even for seasoned veterans. Yet, if you like your Metal of Death doomed all the way, give it a listen. Maybe taken in small doses is what the reaper recommends (I had similar thoughts after a first listen, but the album really started to grow on me, the more time I invested in it. So maybe it is one of those releases that just need a bit more time to get into… – Frank). More information you will find here: www.facebook.com/officialbeastofrevelation, www.facebook.com/ironboneheadproductions