BEAST OF REVELATION is a new and very obscure sounding Doom / Death Metal band with several familiar faces: John McEntee (INCANTATION), A.J. van Drenth (TEMPLE, ex – BEYOND BELIEF) and Bob Bagchus (ex – ASPHYX). Their debut album “The Ancient Ritual Of Death” is a rather overwhelming disc. We had a nice and interesting conversation with A.J. van Drenth.


You already collaborated with Bob Bagchus in the band THRONE many years ago. How do you look back on that band today?
“Indeed… we did THRONE about 25 years ago! Bob was very successful with ASPHYX. And I just released the second album “Rave The Abyss” with my band BEYOND BELIEF when we started doing that project. Our goal was to record a demo tape, heavily influenced by our old heroes like SLAUGHTER, BATHORY… you name it. We recorded a rehearsal and a demo tape which were both spread and welcomed in the underground scene. The re-release of both tapes several decades later on CD (Vic Records) and vinyl is of course very cool. Especially the vinyl version looks really beautiful. It was released by Deathworx, the label of Manuel Tinnemans who also did the artwork for the debut album of BEAST OF REVELATION.” 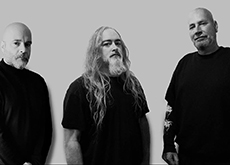 At the end of March, “The Ancient Ritual Of Death” – the debut album of your new band BEAST OF REVELATION – was released. When did you get the idea for this new band? What was your main goal from the beginning?
“Bob and I had been thinking about getting back together for quite some time. And the re-release of the THRONE material sort of helped to get things rolling again. At some point, I rather spontaneously wrote and recorded the song ‘Legions’ and sent it to Bob. He was very enthusiastic. From that point on, I started writing more songs. And in almost no time I had enough music for a full album. Quite soon after that, we recorded the drumparts in a studio in Enschede. After that, I recorded the guitars and bass at home. The main goal was initially to record and release a really heavy record. Which certainly worked! “The Ancient Ritual Of Death” has really become a record that will appeal to the enthusiasts of old school Death / Doom. We are therefore quite proud of how it turned out.”

BEAST OF REVELATION started as a studio project. You were able to get John McEntee of INCANTATION on board to do the vocals. Since you have been on the road as a roadie with both INCANTATION and FUNERUS quite regularly in the past, the contact with John was probably easily made. Was it easy to convince him?
“Marc Grewe (ex – MORGOTH) was initially going to do the record as he really wanted to do some heavy and slow music. But in the end, I didn’t think his voice really matched with our music. Don’t get me wrong, Marc is a great singer. But I was looking for very heavy grunts. So I quickly turned to John. And indeed, since I already knew John very well from various tours together, it was logical that I asked him. John was into it right away. He really liked the idea. He is a total Death / Doom freak. John is a very busy musician. And so, we had to be a little patient. But we were fine with that.” 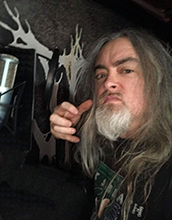 We assume that John has recorded his parts in the US. Was it easy to create a sort of band feeling? How did John contribute to the songs?
“John recorded his vocals in his homestudio in Johnstown, Pennsylvania. But he has moved since then to North Carolina. He did the first five songs pretty quickly. I got his vocal tracks in my mailbox at night. And in the morning, I added them to the rest of what had already been recorded. I did some backing vocals here and there myself, just to spice things up. Every now and then, John also sent some pictures when he was recording his vocals. So there certainly was a sort of connection. John was sometimes also over here in Europe with INCANTATION where I visited him to catch up. And we also texted a lot.”

I would describe BEAST OF REVELATION myself as very extreme and obscure sounding Doom / Death Metal to even Funeral Doom. I already read comparisons with old CATHEDRAL and PARADISE LOST. But in my opinion, that comparison is really not suitable, because your music is much more extreme.
“I agree with you. But that actually came from Bob. He had even mentioned ST. VITUS as an influence on a flyer. But that band has not really been influential to me in any way. So we took that away. Anyway, CATHEDRAL, PARADISE LOST, early 90s… I get that. Our music would have been fine at that time. But we are indeed a lot more extreme. And going much more towards Death Metal.” 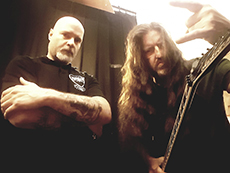 If you go through the titles of the songs of the debut album – for example ‘The Great Cryptic Void’, ‘The Days Of Vengeance’ and ‘The Unholy Roman Empire’ – they seem to be very obscure and at the same time very diverse. Did you write them?
“I did indeed. All the lyrics are influenced by the biblical book of revelation, as the band name indicates. I wrote lyrics about that before, during my time in BEYOND BELIEF. It is a very interesting but also heavy subject. And it also refers to the contemporary era. According to the chapter ‘Revelations’, we have arrived at the endtime. The emergence of the so-called new world order… the Matthew 24 bible book, so to speak. I have studied this all my life. We agreed that I would provide lyrics and vocals for the first five songs. And John would take care of the last two songs. But since John had quite a busy tour schedule with INCANTATION, I eventually wrote everything. But we did write the lyrics for the titletrack together. I sent John the songs with my vocals and the lyrics. And he sang them exactly like that.”

The band photo of BEAST OF REVELATION features Bob, John and you. But guitarist Eric Daniels (SOULBURN, ex – ASPHYX) has also been part of the band for some time now. I thought that Eric wanted to limit himself to SOULBURN. In that sense I am quite surprised that he is now also part of BEAST OF REVELATION.
“Bob, John and I are the ones you can hear on the album. I asked Eric if he wanted to do a lead on the song ‘The Unholy Roman Empire’, because there’s a real ASPHYX – like riff in there which was perfect for a guitarpart which only Eric can play. And he came up with a great solo. At the last edition of the Stonehenge festival in Steenwijk, I spoke to Eric and Bob after the concert of SOULBURN. Eric and Bob convinced me there to turn BEAST OF REVELATION into a real band. A little later, we got together in the rehearsal room to see if there was a connection. And there certainly was, because we practice a few times a month now.” 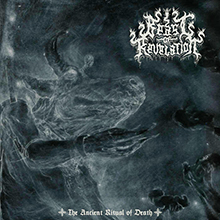 The artwork of “The Ancient Ritual Of Death” was made by Manuel Tinnemans. It looks beautiful, but it differs quite a lot from what we are used to from him. The drawing is a bit more vague and makes you use your imagination a bit more.
“I had some ideas for the sleeve of the album. In any case, it should not be a colourful painting. We had no idea who was going to do the cover. Manuel made an offer himself, he really insisted on doing the cover. And as he’s a great artist, we didn’t hesitate. I only gave him one hint… ‘Sacrifice To Moloch’. That is also what the titletrack is all about… the part in the Old Testament where the Israelites offered their children to Moloch. Drums were beaten hard to drown the screams of the children who were sacrificed in the fire. We were very enthusiastic when Manuel sent us his first sketches. And it has become a really beautiful piece of artwork. The layout of the album was done by Dan Fried from Seattle which was also a nice collaboration.”

“The Ancient Ritual Of Death” is released by Iron Bonehead. Was that label an obvious choice?
“The deal with Iron Bonehead went quite smoothly and was settled quickly. Bob and I had paid for the mix and the mastering ourselves which was done by J.B. van der Wal, the bassplayer of DOOL. And the money was refunded by the label afterwards. There were more interested people, Everlasting Spew for example. But Iron Bonehead had the best conditions.”

Bob took a step back a few years ago and decided to leave ASPHYX because things were getting too busy for him. However, with BEAST OF REVELATION, INFIDEL REICH, HELLEHOND and SIEGE OF POWER, he seems to be more active than ever. And with TEMPLE and EXTREME COLD WINTER, you also seem quite busy.
“BEAST OF REVELATION is the only band Bob will be playing with live. The rest are all just studio projects. For those bands, he only needs to go to the studio to record his drum parts. We practice with BEAST OF REVELATION because it is fun to do. And besides that, there’s an occasional live show here and there. That’s doable. TEMPLE and EXTREME COLD WINTER are also just studio projects for me. Regarding EXTREME COLD WINTER, we are almost ready to record the vocal parts of Pim Blankenstein and do the mixing. That will be a very nice Doom album, a bit towards MY DYING BRIDE. But I have no concrete plans for a 3rd album with TEMPLE at the moment.”

A few weeks ago, you played your first gig with BEAST OF REVELATION in Ommen in the Netherlands. You were joined on stage by bassist Sandra Hoengen and frontman Leon Helleman (BRUUSK). BEAST OF REVELATION has grown into a real band.
“Yes, that’s right, we want to do some live shows with BEAST OF REVELATION. There are already quite a few offers from festivals. We know Sandra as the woman who takes care of the lights for SODOM and ASPHYX. But she is also an excellent bassplayer. We had the problem that John is living in the United States. He definitely wanted to do some shows, but then at least a week-long tour. Which is very understandable, but also quite a hassle to organize. That is why we have Leon for the live shows now. John is fine with that. And who knows, if John happens to be around… you never know. We definitely want to release more music in the future. But we are now first concentrating on practicing the live-set which is going very well. It all sounds very heavy! Eric and I already have quite a few riffs and ideas. We will get together and sit down for that soon.”