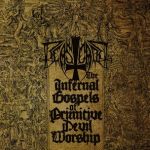 This full-length is also a kind of a dirge and an homage to Alastor Nefas, one of the two musicians responsible for BEASTCRAFT, who died five years ago and to whom this work is dedicated. So it is also, possibly, the final nail in the coffin of the band itself. Beginning with a backwards spoken intro (I guess) over a storm, we immediately proceed to full-on Norwegian Black Metal as inspired by mid 90s DARKTHRONE. Grim sounding guitars with hissing distortion that almost sounds like the pouring rain, never a palm-mute, and raw full-speed drumming. It sounds very wicked and aggressive… were another reference needed, a good choice would be URGEHAL, of which Nefas was also the frontman. The track that follows, ‘Deathcraft And Necromancy’ eases the pace a lot, and is very slow and melancholic. And so the tone for all that follows is set, since between these two registers the album henceforth flows. Slow melancholy like in ‘Reborn Beyond The Grave’, explicitly about Nefas, and in which, incidentally, there is even a guitar solo. But also true savagery, such as in ‘The Devil’s Triumph’, with remarkable ripping vocals and musical onslaught. Despite the deliberately raw and primitive production and composition, there is talent to be found, with strong songs such as ‘Her Highness Of Hell’, perhaps my favourite in the album. There is a limited edition of "The Infernal Gospels Of Primitive Devil Worship" that features a bonus DVD with live material and interviews, etc. If you are into evil Black Metal with the brand of the Norwegian sound, I’m sure you’ll love this. I found it much better than a host of other such bands. www.facebook.com/beastcraftofficial, www.pulverised.net

BEASTCRAFT - Into The Burning Pit Of Hell - by Stefan Hagmayer