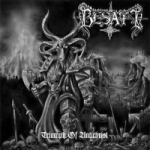 Tempus fugit (time flees), like the old Romans used to say. There are people in the Black Metal scene who were not born when Beldaroh and Weronis decided to create BESATT 16 years ago and despite the fact that BESATT never belonged to the top acts within the genre, they got enough stamina to be still on duty. “Triumph Of Antichrist” is their sixth full-length release, and of course they are “hardboiled and still fucking hellbound”, to quote IMPALED NAZARENE. Like the predecessor “Black Mass” the band is able to convince the listener with a great vision of what Black Metal should be. A rough, yet adequate sound, expressive vocals somewhere between shrieks and grunts and of course a versatile songwriting, covering the whole spectrum from fast, mid-tempo and slow songs. Accordingly a very fine dose of Thrash Metal is added, reminding me of Germans old school thrasher DESASTER. Especially those mid-tempo, Thrash Metal influenced parts are really great and amongst the best what BESATT has to offer. In combination with the more Scandinavian influenced Black Metal parts a very enjoyable mixture. BESATT anno 2007 proves once more that the paths of Black Metal maybe well-known, but it is still possible to walk these paths in a fresh and enjoyable way. www.besatt.net