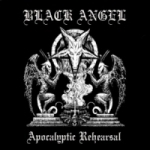 Do you like Satanic Metal in its utterly purest form? Do you rather listen to rehearsal tapes than mastered releases and stick to your tape-traded versions of albums you can easily buy today? Do you prefer MAYHEM’s “Pure Fucking Armageddon” or DARKTHRONE’s “Goatlord” above awefully neat produced albums from DIMMU BORGIR, IMMORTAL and SATYRICON. Well… if you do, this “Apocalyptic Rehearsal” by BLACK ANGEL from Peru is safe in your bloodcovered hands! This is pure South American Black Metal madness! Started in 1997 they have a long list of releases already and as far as I know are the oldest Black Metal band in their country. So almost ‘ancient’ with members of GOAT SEMEN. Though this release doesnt’t reach the GOAT SEMEN level, this is really simple and possessed violence that will remind you of SADISTIK EXEKUTION, SARCOFAGO, BEHERIT and likes. This release features 8 incantations of which two are covers, namely ‘Nightmare’ by SARCOFAGO and ‘Deathcrush’ by MAYHEM. This is for die hards and titles like ‘Occult Eternal Mystery’, ‘The Hell’ and ‘Apocalyptic War I’ speak for themselves, right? Check www.myspace.com/blackangelperu, www.time-before-time.com for your copy and even though this may sound too dull or simple, it’s important to keep supporting bands who still dig for the essence of this style. I also want to congratulate BLACK ANGEL for being the first band to feature Linda Blair on vocals.

BLACK ANGEL - From The Darkness - by Michael Oelschlegel