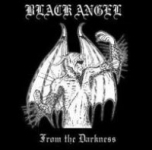 BLACK ANGEL belong to one of the oldest, still active Black Metal hordes from the Peruan wastelands and Latin America in general. Ex – members of this cult act formed bands like GOAT SEMEN or LEVIFER (just to name a few). This hellish outfit released several demos within the last years and some of them were also banned on CD format for all underground hellbangers out there. The first official album was already recorded back in 2003 and is now finally unleashed upon mankind as co-production by Ketzer Records and Onslaught Records from Mexico. The little silver disc is entitled "From The Darkness" and offers you nine raw tunes which are in the ancient tradition. So luckily you won’t find any modern influences or other worthless gimmicks here. The blackened angels have a lot of mid tempo and even slow and creepy songs to offer compared to their native countrymen from GOAT SEMEN or ANAL VOMIT. But this doesn’t mean that this infernal squad plays slow. No, of course you will get enough hard hitting fast passages here and due to the slower parts the outbreaks sound quite intense. The fast ‘Apocalyptic Warrior II’ reminds me on old DECAYED stuff wereas ‘Harlots Of Satan’ captures the bestiality and spirit of old SARCOFAGO. ‘Slaves Of Sin’ is also a quite fast tune and even the midpaced / slower stuff like ‘Enter Two Forces’ and ‘Rites’ can convince me with their incorporated bestial attacks. Mastermind Hector Corpus has a very special raw vocal delivery and his hypnotic style of singing is almost in the same vein than the voice of the mighty INQUISITION. The production of the album is raw and unpolished and has this certain South American flair. Metalheads who are into South American brutality can check this horde out which is far beyond any trends and commercialism. www.ketzer-records.de or http://blackangelperu.cjb.net.