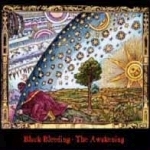 Time to dust off your tape decks – a cassette release from the Belgian trio BLACK BLEEDING demands your attention. On five tracks these guys elaborate on their brand of fast grinding Black / Death Metal. Actually, every song comes across quite different than the others making it hard to pinpoint the style of BLACK BLEEDING – maybe traces of MORBID ANGEL, BELPHEGOR and ZYKLON coupled with Black Metal edges, melodic riffs, a dose of Thrash and even some epic parts driven by fast blasts and double bass sums it up roughly. Being relatively lengthy (ok, 4:50 minutes on the average with the exception of track five, 9:26 minutes) the tracks are given enough time to develop so that the listener does not get a "new riff – new style" sensation, heh. Rather than that, the catchy riffs build up to each other and there are plenty of variations like cool midtempo breaks which add a lot of heaviness to the grinding speed and exact fast blasting. As tight as the instrumentations are the vocals which mainly are powerful deep midranged with some excursions to croaked Black Metal regions. The song ‘One With The Universe’ can also be downloaded from the bands homepage at: www.listen.to/blackbleeding. If I am not mistaken you can also order a CD version of this with aditional five live tracks there. All in all, BLACK BLEEDING have come up with an interesting and quite powerful release which is definitely not setting any new standards but offers cool catchy Metal instead. Might be interesting what the band will come up with next! Nihilistic Holocaust homepage: http://site.voila.fr/NIHILISTIC/

The Belgian three-piece BLACK BLEEDING is around for quite a while now without rising more than a little bit of dust. Three full length releases, all on a very independent, means self-financed basis, an EP and three demos are in the bands discography through their nearly twenty years of existence. It was just two years ago that the French label Nihilistic Holocaust were the first to take care of these guys and helped them to spread their word. Listening to the recently re-released demo “The Awakening”, it’s quite a pity that BLACK BLEEDING remained undiscovered that long. I rarely heard a band in the Black Metal universe with a sound and style that’s as unique as the five songs on “The Awakening”. Imagine Black Metal of the early days as the basis, add a shot of old Death Metal, melodic guitar riffs that seem to be from the early 1980s, some hints on Thrash Metal and even drum patterns that remind of early MASTODON and you might get a notion on what BLACK BLEEDING had to offer in 2005. Strange thing is that this mix sounds not that botched-up as it seems, but pretty logical and fluent. From the first riffs of the very fine opener ‘The Sleeper Has Awakened’, the a little bit longer songs caught my attention thanks to their uniqueness. With the final, even a little epic ‘Demonic Quantum Boundaries’, BLACK BLEEDING finally got me. If you’re likely to dig strange but great stuff, visit www.facebook.com/beerbleeding or the label http://nihilistic-webzine-distro.fr