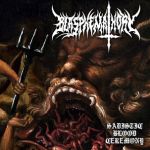 BLASPHEMATHORY is a Mexican Death Metal outfit formed in 2018 from members and ex – members of some great bands such as GROTESQUE DEITY, CENOTAPH, HACAVITZ and PUTRESCENCE just to name a few. I listened to the EP before I knew about these guys’ background and I was impressed. If I had to choose just one word to describe these 4 songs, that word would be intense. So, after I got some more info on the band, the results seem kinda obvious. These are well seasoned musicians that don’t have to try too hard to come up with amazing music and so they have done. Production wise, the sound is really tight. It actually has some of that 90s charm that Mexican bands that came out in that time kinda pioneered, so to speak. Sorry for the comparison, but I grew up on some of these bands and it is something really meaningful to me. That was one thing that attracted me instantly to BLASPHEMATHORY’s sound. The guitar and bass tones are thick with a razor sharp top edge. The drum performance is really good. I really like that the drummer sometimes favors silence instead of saturating everything with fills. And the drum sound is not plastic or sterile, which adds a lot to the recording. And the vocals are simply awesome. Some may say they may be one-dimensional, but they work really good within the context. And the awesome mix just balances everything well, so nothing goes unnoticed. Punchy and tight Death Metal as it was meant to be. Now, the other thing that really hooked me on this band is their flawless use of dynamics and variation. The songs "feel" logical, yet unexpected enough to keep you waiting for more. And although the songs are mostly fast paced, the mix of tremolo riffs and fast drum parts do great contrast with the slow open chords and pounding sections that are thrown in here and there. And surprisingly, BLASPHEMATHORY can do both without batting an eye and, and over it all, keeping things interesting. So, basically, this is one hell of a debut EP. And BLASPHEMATHORY is a band I will be following closely from now on. Go show the band some support at www.facebook.com/blasphemathorymx and get their debut EP from their label here: www.facebook.com/ibdc666