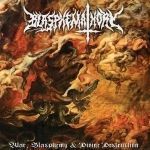 Long gone are those times when bands were putting out albums that would become landmarks on their own. Although there were lots of bands, all of them sounded different. Nowadays, it is rare, really rare for an album to surprise me. It seems there are incoming waves in certain genres, with a bunch of bands jumping on the same bandwagon. But sometimes there are albums like “War, Blasphemy & Divine Destruction” that stand out immediately. It holds all those well known characteristics of Death Metal from the late 80s and early 90s and adds a weird and original twist to spice things up. The production feels familiar, raw and organic. Yet the mix is not muddy or murky at all. It hits you in the face like a ton of bricks right after the intro. The guitar and bass tones are thick. Basically a wall of heavy distortion that annihilates your senses with a mix of tremolo and palm muted riffs. It is really interesting how the drums, although savage and fast most of the time, add a lot of dimension to the slow parts. Especially the headbanging passages that tend to seldomly appear from song to song. The vocals, low and grunting, play two different roles, acting as part of the sonic mayhem in certain places and as another percussive instrument in others. The song structures vary from one another but never fail to keep the listener focused on the evil atmosphere this album has. Imagine the blunt attack from “Seven Churches” mixed with the sharpness of “Altars Of Madness” spiced up by the Latin American savagery of “INRI” and you have “War, Blasphemy & Divine Destruction”. Also, the fact that BLASPHEMATHORY is from Mexico, a country well known for excellent Death Metal bands throughout history, brings a lot of obscure aura to this album. “War, Blasphemy & Divine Destruction” is an outstanding album that has it all to become an instant classic. After the first listen, I could only hit the repeat button again and again. It grabs you by the throat and never let go. An amazing and brilliant Death Metal statement! Contact the band for a well deserved suport here: www.facebook.com/blasphemathorymx. And get their album from their label here: www.facebook.com/ibdc666