Back in 2018 and virtually out of nowhere, BLASPHEMATHORY, a new Mexican band, released “Sadistic Blood Ceremony”. This EP not only showcased some great music, but also a perfect mix of extreme Metal styles that instantly put the band on the spot and in the “bands to keep track of” list. Fast forward September 2019 to when BLASPHEMATHORY released their debut album, aptly titled “War, Blasphemy & Divine Destruction”. A furious and savage dose of pounding Death Metal that has all the features of an “instant classic”. So, to know a bit more about this excellent band, we contacted Eduardo Guevara, guitarist and mastermind behind the band and he kindly answered our questions…


How was BLASPHEMATHORY formed? Did you already know each other from previous bands or was there a situation in which you decided to do music together? 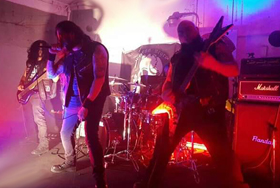 “BLASPHEMATHORY started as a solo project with me being the only member! I started recording the tracks of what would be the debut EP, but I was not achieving a sound that stood out on the drums so I decided to find some members. When Alejandro Ángeles joined the ranks as a drummer, we finally got the sound we wanted! I re-recorded guitars and bass and finally we had Roel Slaugther taking care of the vocals. That was how we achieved the sound of the debut EP “Sadistic Blood Ceremony”.”

What does the name of the band represent? Is it just a mixture of two classic band names or does it have some other meaning? How did you decide on the style you were going to play? Was it something spontaneous or did you already have something planned?
“Our name is not allusive to big bands like BLASPHEMY or BATHORY! It is simply the BLASPHEMATHORY, a place to yell out the dark part of our existence! The style is Brutal Death War Metal! And there was already a set idea of what we wanted to play and how we would approach the style of the band.”

What influences can you mention as your main ones? The 3 members play (or have played) in other bands. Can you say that your previous bands have also influenced the music you are currently doing?
“The influences of this band come from MORBID ANGEL, LUCIFERION, DEICIDE, IMPIETY and ANGEL CORPSE! Those are the most prominent influences! Among the ranks we have members and former members of other bands. So, our influences as a whole will always be reflected in our music and our playing style!” 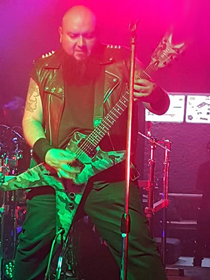 After the band was formed in 2018, it went straight into releasing your debut CD / EP “Sadistic Blood Ceremony” with Iron Blood Death Corporation (IBCD Records) that same year. Was there any previously recorded material that got you to sign with IBDC? Also, Metal Inside Records released the tape version almost a year later. Did you contact the label to do the MC version or vice versa?
“IBDC was already interested in releasing the EP but we also had an agreement for the label to put out our debut album. As soon as the EP came out, we started to work on what would become “War Blasphemy & Divine Destruction”. We worked approximately 9 months on it. After we were done with pre-production, we went to Brave Sound Studio in the city of Irapuato. This time we brought in Jesús Bravo to take care of everything. And we were very satisfied to work with him and the final sound we got for thew album. We also came up with some great art and two CD versions: digipak and A5 size! As of now, we remain focused on making a new EP and a new LP, both to be released in 2020! That is our work and dedication! And there was no special situation with Metal Inside Records. We just got in contact the usual way.”

Where was the EP recorded and how long did it take to complete it? Was there any special situation or did everything happen in a good way? Maybe some anecdotes of the process?
“The EP was recorded in a couple of days in the M.A.T. Studio. The mixing and mastering took a while, all due to different reasons.The process went smoothly in a very pleasant way. Curious facts or anecdotes? Well, just the incredible drunkenness and camaraderie with all the people who came by when we were rehearsing and recording or simply to hang out and talk. It was very cool!”

What was the general reception of your debut EP ? Do you think that IBDC has worked hard to launch the band and promote this material?
“The reception was very good! IBDC has been doing its part with the promotion very well. My wife also helps doing some additional stuff, so we can concentrate in playing and trying to grow more and more each time as musicians and performers! That is the way this band works!” 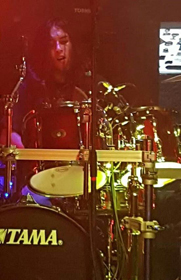 Were the 4 songs off your EP the only material you had at the time of recording? Were there songs left out and if so, did you use any of that material for “War, Blasphemy & Divine Destruction”?
“That’s right, the songs off our EP were the only songs we had. But at the same time, new songs were already being composed and structured for the LP! There were no leftover songs. All new songs were made in their own time and with the intention of being used on the debut album!”

Regarding the debut album, do you think this has had a good reception in the global underground scene? Is all the material included new or did you already have previous songs that you used for this? I imagine there is more material that would eventually come on another album and / or EP.
“The reception has been very good and so far there are great reviews from Germany, Poland, Spain, Portugal, France, Russia, Brazil and the United States; of both, the EP and the full length! We already have new material and we will gradually start working more and more on it for the new releases in 2020!” 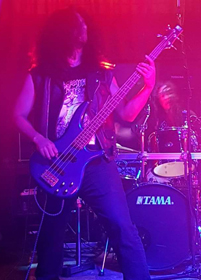 Did you use the same studio in which you recorded the EP to record the album? If not, why the change? What role did Jesus Bravo play this time? Are you satisfied with the sound and the production of the album in general? Is there anything you would change?
“The LP was recorded in Brave Sound Studio under the supervision of Jesús Bravo and we were able to achieve a different sound from that of the EP just for a slight change, since the sound we got from M.A.T. Studio was also very good. We were very happy with the work of Jesús Bravo; the sound, the mix and the mastering turned out spectacular!”

Who writes music and lyrics? Is it a joint effort or does everyone have a voice and vote when coming up with new songs?
“I do most of the music and lyrics. My wife also helped with 3 songs on the album, since she is also passionate about our lyrical content and musical style. As for new songs, I work the song structuring with Alex first, since he has a rather peculiar drumming style. Once those are done, we start coming up with the vocals with Roel Slaughter until we are satisfied with the phrasing. That way we can achieve our goals when it comes down to the music, it’s meaning and execution. We always take that approach very seriously.” 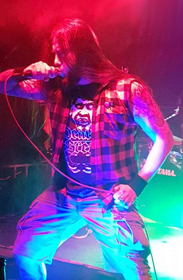 The base of BLASPHEMATHORY’s music dense and raw Death Metal, but other influences are also very noticeable. Is this an integral part of your style or do you like to mix different sounds and atmospheres in your music for any other reaons?
“Yes, our sound is based on Death Metal. But we also like to experiment and mix different styles as long as there is coherence and harmony, so to speak, when doing so. It is also a matter of us being able to express our thoughts through our music!”

The band has been busy playing live often in Mexico. Have you used session members for these gigs? How has the local scene received BLASPHEMATHORY when playing live? Do you have plans to play outside your country soon?
“We have been playing enough and no, we have not used session musicians. The only issue we’ve had is that we can never play all our material due to time constraints. Since we always alternate with many more bands, this always comes up as a limitation. But I hope that for 2020 we will be able to do the an entire show with all our songs. We’ve had some offers to play outside our country. Hopefully as a band we can achieve that eventually. As of now, we all have our jobs and it is not easy for any of us to leave 15 or 30 days for tour dates.”

Short, medium and long term plans for the band?
“Plans? We are already working on a new EP and also a new LP. Also, we will keep doing shows, trying to perform better onstage and play abroad as soon as we can.” 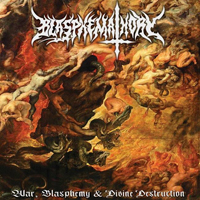 In your opinion, what has the internet done for the underground? Do you think it has been a help or has been detrimental to the bands and the Metal scene in general? What would you change if you could do it?
“Well, it is extraordinary that nowadays the promotion gets everywhere; all over the world! But it has undermined the CD, vinyl and tape sales a bit.”

Well, I think that basically covers everything I had in mind. So the last words are yours. Thank you Eduardo and take care!
“Thank you very much for the interview! We will keep promoting the band locally as much as we can. We will also have news on the releases coming up for 2020, any international shows, etc. We expect all true Metalheads to come to our shows. We appreciated all your support. Thanks to all of you who have already purchased our CDs and official t-shirts. Thanks again! Yyyyeeeeaaaaahhhhhh!!!!!!”