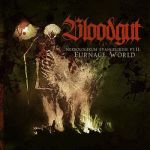 Mister Rogga Johansson has released another one! This time joined by drummer Matthias ‘Matte’ Fiebig (BLODSRIT, MORDENIAL, PAGANIZER, PORTAL, ex – CARVE, ex – RIBSPREADER and others) is the second album of BLOODGUT, entiteld "Nekrologikum Evangelikum Pt.II: Furnace World". If you have followed the works of Johansson (or the bands / projects he contributed to), you immediately know this isn’t a new release. As follow up to the in 2010 released debut "Nekrologikum Evangelikum Pt. I: Zombie Reign 2666 A.D.", this album featured 18 tracks and was originally released on Vic Records. This version is released by Iron, Blood And Death Corporation and features only the first 11 tracks. Why the other 7 tracks are missing is info I lack. Somewhere in 2010, I heard the track ‘No Vacancy at Zombie Inn’ on MySpace and was immediately drawn to this one. It’s the slowest track featured here and with melancholic female vocals and melodies it sounds suprisingly atmospheric and still dark. Amazing! The rest is mostly a brutal Death steam-roller with a fat wink to releases of IMPETIGO, DISGRACE ("Debts Of Gods") and XYSMA (pre "Yeah"). Especially these last two kept popping up as comparison because of a similar rocking groove in the riffs. This comparisons would be outdated, limited and do injustice. So to keep within the portfolio of these two gentlemen, you could compare it with RIBSPREADER on the last four tracks of "Rotten Rhythms And Rancid Rants (A Collection Of Undead Spew)" or a rawer version of CARVE. The tracks are mostly short and heavy. The heaviness is partly defined by the rugged riffs and partly by the bass sound. This has a similar subtle presence of somebody with morbid obesity in a cycle rickshaw. And made me wonder if there was any space left in the production for any guitar. The vocals by Rogga are in the dual vocal style with which CARCASS successfully pioneered. As can be heard in this style a few tracks start with a sample. Luckily BLOODGUT realize this is fun for a few times and don’t overdo it. Apart from the mentioned exception ‘No Vacancy At Zombie Inn’ there’s room for more experiments. ‘Defiled In The Fleshcabinet’ is a housetrack and ‘Furnace World (Nekrotikum Evangelikum Pt.II)’ is a weird instrumental progressive tune. Also ‘Slothful Crawl Of The Undead’ has a successful outcome and is more Rock than Grind, reminding of PUNGENT STENCH here and there. "Nekrologikum Evangelikum Pt.II – Furnace World" offers more than you’d expect at first and (despite a few exceptions at the end) it’s a pleasing and almost versatile record. It keeps fascinating after many spins and it’s a shame this project ended after this album. This asks for more! For more info check out www.facebook.com/pages/bloodgut/104369999614319, www.facebook.com/ibdc666