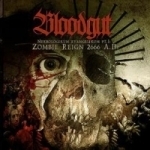 BLOODGUT is a zillionth project formed by Rogga Johansson (guitars, bass, vocals) with the help of drummer Matthias Fiebig on drums and one difference strikes immediately when you push the “play” button, i.e totally putrid and sick sound of guitars and bass. At first I thought there was something wrong with the recording, but after few tracks I got used to it and after few more spins it grew on me like a festering abscess, I think it totally fits the whole concept of BLOODGUT which is deeply rooted in the slime swamp started by AUTOPSY, IMPETIGO and the likes. Instead of trying to purely recreate or imitate the old masters, BLOODGUT gives its own twist on the zombified theme and come out like a rotting winner!! The tracks are in the mid to slow tempo range, vomitous vocals add to the suphuric atmospehere of the underworld and the arrangements, while quite basic, managed to keep me into their grip throughout the whole album. In fact, I was so hooked that I spun the fucker 3 times in a row and it impressed the hell out of me with each new listen! The whole presentation of “Nekrologikum…” reeks of low-fi underground quality and true obsession with Horror / Zombie themes showing that Rogga still manages to churn out old school Death Metal like a motherfucker! Massive respect! Buy or DIE!! www.myspace.com/bloodgut, www.vicrecords.com