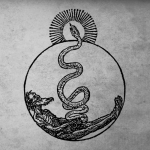 DARVAZA is an already quite long running international project of multi-instrumentalist Omega (BLUT AUS NORD and loads of other bands) and singer Wraath (BEHEVEN, among others). After three EPs, the duo now has a first full length album out. So, what can we expect from two musicians with lots of time (obviously) and dedication for Black Metal? Usually not too much on first thought, but “Ascending Into Perdition” is definitely far more than another redundant album in my humble opinion. Even though DARVAZA have not reinvented Black Metal on this album, the six long songs have a lot to offer. Variability is the key to “Ascending Into Perdition”, as the album forges a bridge from the old school of Black Metal to the recent, more atmospheric interpretation of the style. As a perfect example serves the song ‘The Spear And The Tumult’, that has a basic beat and guitar harmonies which reminded me of old DARKTHRONE, but in the long run breaks occurred that seemed to be inspired by some newer French acts. Thus DARVAZA skilfully manage to avoid the pitfalls of cliché, a merit that makes a good Black Metal. And with ‘This Hungry Triumphant Darkness’ DARVAZA even have created a song that sometimes parks its tanks on the lawns of the New Wave Of British Heavy Metal, making it a catchy song even with ear worm qualities. The dark ‘The Second Woe’ and the quite epic ‘Silence In Heaven’ top off an album that features nearly anything good and gloomy Black Metal needs. For more, visit the band at www.facebook.com/darvaza.blackmetal or the label at www.facebook.com/terraturpossessions