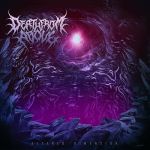 It is quite a little sensation that the name DEATH FROM ABOVE wasn’t chosen for an extreme Metal band before. To me, it is quite a natural moniker that fits a good Thrash or Death Metal band. Instead, there only was this strange Indie Rock band called DEATH FROM ABOVE 1979 that no reader of this site needs. So it was up to a new French outfit to choose that name. This four piece mainly consists of members from CAN OF WORMS plus guitar player Antho from RED DEAD. And now the first result of this collaboration is available in form of an album called “Altered Dimension”. What we get on this album are eight songs plus an intro (‘Orbital Transmission’) that are somewhere in between Thrash and Death Metal. Yeah, this might ring some bells: NO RETURN, MASSACRA, MERCYLESS and other names come to mind. But I’m sorry to say that DEATH FROM ABOVE can’t take a stand against the old French Death Thrash scene 30 years ago. Even though songs like ‘Power Of Demons’, ‘Parasite Hive’ or ‘Vile Precursors’ might have one or another nice moment that made me listen up, most of the time “Altered Dimension” passed me by without leaving too much impression. Mainly uninspired riffs meet average vocals and some very strange sounding spaced out effects like from Science-Fiction B-movies. On top of that, we get a too clinical production and thus another average album is done. Too bad, there was more to it. Just in case, visit www.facebook.com/deathfromabovedeathmetal or www.facebook.com/greatdanerecords