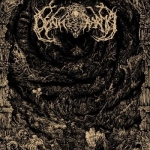 Chaotic and dark Death Metal from the Czech Republic is not something I stumble across each week, though if it encounters me with a fist in my face, as this release from DEATH KARMA has, please bring it on! The two members of the band have been in different bands within the Czech Death and Black Metal scene, and have now decided to join forces, to create grim and disturbing music with DEATH KARMA. Grim and disturbing it is, cloaked in a rather thin, raw and noisy production the band kills with inspiration from Canadian warmongers as BLASPHEMY, CONQUEROR, like minded conspirators from their own area and a good deal of South American madness, and touches of atmospheric symphonic Black Metal and touches of raw thrashiness, there are some really good thrashing riffs here and there. The above sounds like a good deal of chaos and a quite unrefined output, though Tom Coroner and Infernal Vlad ties the knot really well together, and the music ends up hard hitting and rather catchy for its genre and rawness. A quite interesting effort the two guys here have put together on this 12" Mini LP (Iron Bonehead), that also is found as a CD version (New Era Productions, and if we have to be totally nitpicking, there has also been a cassette release by Exitium Productions, limited to 100 copies released to the Prague Death Mass II), even though it seems a tad schizophrenic during the first couple of listens, though give it some time and it’ll grow. I like my Death and Black Metal chaotic and raw, a whirlwind that blazes through my mind, and rips everything apart, and DEATH KARMA succeed with that in manner. A lasting first effort, that hopefully soon will be followed by more madness, as these guys have hit some right and hard hitting spots with this release. Follow the path to deathkaos: www.ironbonehead.de, www.new-era-productions.nl