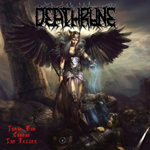 DEATHRUNE
Those Who Choose The Fallen
(Dark Blasphemies Records)
132:37min

I had not in my wildest dream, thought that I would come to hear new material from DEATHRUNE, the old Yonkers, New York legends who released 4 demos back in the nineties, with the "Remain Forever Entangled" from 1995 as my introduction to the Death Metal hardknocks. A demo that sparked my interest for the band, and a demo that should be the last, we back then heard from the band. Until they reunited earlier this year to make and record music for their debut full length "Those Who Choose The Fallen", which now is about to see the light of day, 22 years after the band was formed. The band is more or less intact from their last release, the above mentioned demo with Dennis Gladwell, Diego Bittencourt, Chris Shaw and Mike Saez, the latter who used some of the time of DEATHRUNE’s hiatus to make an appearance in INCANTATION on their 2000 album "The Infernal Storm" and a cameo on the following album "Blasphemy", and he was of course also the beast handling guitars and vocals on the 2001 live abomination "Live – Blasphemy In Brazil Tour 2001". Only Kelly Izquierdo is left out, as he keeps on slaying with MORTAL DECAY. That Saez would end up in INCANTATION isn’t that big of an coincidence, as DEATHRUNE and INCANTATION did follow more or less the same path of brutal, heavy, dark and twisted Death Metal from the beginning, and do have some resemblances sound and expression wise. Though when INCANTATION ended up on Relapse Records in 1991 with their first release for the label being the EP "Deliverance Of Horrific Propheices", DEATHRUNE didn’t catch the attention of the right label, and continued doing demos, until they disbanded, even though the "Remain Forever Entangled" tape was released by Wild Rags Records. This release is the natural continuation of "Remain Forever Entangled", a dark and twisted and technical Death Metal attack of the most raw and pummeling kind. Being hit by a freight train will hurt less, than being hit by this machine anno 2013. The natural continuation from the demo days is quite clear by the appearance of 4 of the tracks from "Remain Forever Entangled" and the title tracks from "Beneath The Cypress Grooves" and "Memories Of The Exhumed" demos. On top of that, the track ‘Ghostwinds’ could be one of the tracks Saez wrote for "The Infernal Storm", that didn’t make it, as it is quite close in style. A pure old school and relentless attack of chaotic and twisted Death Metal, a kick in the face and quite an awakening of an old DEATHRUNE fan. This package with the new album and the 4 demos is quite a nasty treat, that will bring the right grimaces to this Death Metal fan’s grim face this cold and rainy autumn. The quite right companion for the heavily peated Islay malts that the Danish autumn requires to keep warm and comfortable. It is nice to have DEATHRUNE back and incredible how the guys have kept the intense feeling and atmosphere at hold all these years, to bring it all back with this killer attack, and am I totally off when saying that Saez has one of the best vocals around? DEATHRUNE has always been ahead of its time, which the old re-recorded material on this album, together with the demos show, and the new material do follow greatly upon the legacy of old and showcases a bright future for the guys, this is a release that already has taken a solid place on my favorite releases this year, just don’t let us wait as long for the next release! www.facebook.com/pages/deathrune/240437402683123, www.darkblasphemiesrecords.com