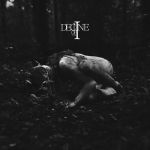 DECLINE OF THE I
Escape
(Agonia Records)
51:30min

When something is labeled as post-something (going by Metal Archives) – in this case Black Metal – it’s hard to know what to expect. Could the same be said about France’s DECLINE OF THE I? Yes. "Escape" is a lot to take in and process, it’s not background music. As far as the aforementioned label goes, the guitars seem a relatively standard affair, which is not meant as a slight against the music. The riffs are quite "Black Metal", meaning there’s no unnecessary guitar wankery going on, which doesn’t mean the playing is incompetent. It just serves the broader picture. Lots of tremolo picking with sense of despair, dread and so forth. Every now and then the guitars shift to cleaner sounds, they slow down and speed up, to state the obvious. So what’s "Post" about it, then? Maybe nothing, as the band labels its music as "troubled Black Metal". But if anything it’s the use of samples. Spoken words, mumblings, choir arrangements, etc. The effect is not hard to guess: it sounds machine-made. Not much place for warmth for sure, only surgical cold. If creating dehumanizing Black Metal was their intent, then job well done. But don’t fret, it’s not that one dimensional. Oftentimes it plunges into madness and it seems it constantly struggles within its confines without going full out crazy – in other words there’s always something unpredictable going on and it’s quite impossible to guess what’s coming next. So… If you like your Black Metal being up to date and not afraid to incorporate alien elements, then by all means dig in. More here: www.facebook.com/declineofthei, www.agoniarecords.com.