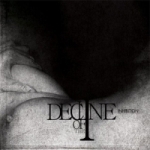 DECLINE OF THE I
Inhibition
(Agonia Records)
58:17min

French DECLINE OF THE I is a Post Black Metal type of project, run by A.K. – the guy who has been involved with many other extreme sounding acts over the recent years (VORKREIST, MERRIMACK, NEO INFERNO 262, etc., just to name a few). DECLINE OF THE I’s debut album "Inhibition", which is said to be the first part of a trilogy that deals conceptually with the study of these three reactions, as ‘inhibition’, ‘rebellion’ and ‘escape’. So there. The band describes to draw their main influences from such acts as BURZUM, CODE and NEUROSIS, which obviously is something some of us can relate to – well, partly at least as I should believe. Personally I am no expert at saying whether DECLINE OF THE I create something that remarkable – or that unique even on the vast fields of Post Black Metal, but if a few well chosen adjectives should be thrown about their stuff, they would certainly be oppressive, depressing, dark and disturbing. Indeed, and what I can tell more about this stuff, it seems to be relatively well executed as wholeness even, mixing a number of more negative-charged adjectives into one bigger entity of dark soundscapes that all create quite a monstrously disturbing and oppressive feel over their stuff really. They have even added a few French spoken words here and there too that securely bring in this more mysterious and eerie mood to their stuff on the record (unless you don’t understand that language a bit). And I don’t want to say more, as I am no expect at this but still nothing should stop you giving DECLINE OF THE I a try either. More at: www.facebook.com/declineofthei, label: www.agoniarecords.com