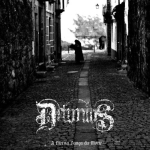 I have been following DEFUNTOS since their “Um Sofrimento Distante” (Portuguese to ‘A Distant Suffering’) EP and this Lusitanian band has always drawn my attention for their funeral music and their intriguing artworks, always depicting the most grieving moments through photographs. At first, their new album “A Eterna Dança da Morte” (Death’s Eternal Dance) is presented in the same old vein, however, this time I haven’t been as struck with their music as I once was. DEFUNTOS’ approach seems to have slightly shifted to a straighter-to-the-point slow Black Metal form that lacks the atmosphere of loss and grief their previous albums used to carry. The very Portuguese feeling of “yearning” so present in their national character was also part of DEFUNTOS’ deadly vibe, but these songs stay simply within the trivial obscure music. The album opens with an intro and three long songs, all of them having some kind of upbeat passages that don’t really suit the outfit’s desolating cadence and with vocal passages that even sung in an unusual language to the style still sound a bit stale. Then, it moves on to another intro song ‘Mortuária Procissão’ (Mortuary Procession) and the homonymous album title track, which fortunately flips the album into a closer approach to their recognized art. Perhaps, getting to this album with previous assumptions might have led me to a certain disappointment, but they have certainly changed. Still, it is an average album, only less impressive if put in comparison to their previous releases. So if you’re not familiar at all with this band, I’d rather say that the last 2 tracks show a bit more of what DEFUNTOS is all about. Find more information about them at www.dunkelheit-produktionen.de.