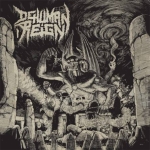 DEHUMAN REIGN is not a new name if you’re familiar with the German Death Metal scene. Otherwise, you have to know that they are from Berlin and they formed in 2011 to play old school Death Metal the way it has to be. In 2013 F.D.A. Records released their debut EP, "Destructive Intent", introducing this new creature of their roster. If the previous EP was good but not excellent, they did a big step to a higher level of quality with "Ascending From Below", the first full-length produced by these Deathsters. The ritual ‘The Ascension‘ precedes the first track, ‘Apply Salt To The Open Wound‘, and you quickly have the feeling that this band kicks ass! The start is great, I love that hurtful riff under a blast beat that seems coming from a burst of a machine gun! Then we have a similar approach with ‘Recipient Of The Abominable‘, while the groovy mid-tempo track ‘Minds Of The Insane‘ breaks up the tension of the two previous songs. Groove is actually never missing in the whole songwriting. These guys succeed to avoid to bore the listener even if most of the songs are over four minutes. There are many tempo changes and always a progressive development of the main themes. So, it’s clear that DEHUMAN REIGN are skilled musicians with experience and good taste: Alex’s growling vocals are cavernous but enough articulated to recognize the lyrics; both guitarists, Ulf and Tesk, play sufficiently technical but concrete, without an extreme use of shredding guitar exercises and neverending solos. The style of bassist Rouven is maybe the most particular here, he likes to put emphasis with some slap bass and alternative line notes, mostly in the mid-tempos like before the end of ‘Articulating The Unspeakable‘. He reminds me of a mix of Jacek Perkowski from PUNGENT STENCH and Steve DiGiorgio. The drumming of Totte is similar to that one of masters like Doug Bohn or Dave Curloss, very fast and accurated in the blast beats and fills, and I like a lot how he sometimes changes accent also on the same bar. After a lot of listening, I can say that "Ascending From Below" is a really good Death Metal album in the vein or early SUFFOCATION and VADER. It’s surely an impassionated tribute to the old school but with a glint of personality, the key to be noticed between the hundreds of similar records of these times. The production is also spot-on, all the instruments are well mixed and balanced. If I have to choose the best tracks of this album, I’d say ‘Drown In Agony‘ and ‘Stench Of The Infected‘. This last one is probably the most perfect song of the album with all the elements I spoke about. 2016 will be another year with many great Death Metal releases, and DEHUMAN REIGN will surely be in the “Best Of“ lists at the end of the year. So support them and F.D.A. Records at www.facebook.com/dehumanreign and www.fda-records.com.