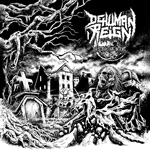 The German capital Berlin tries to win facebook fans with the slogan "The place to be". That’s right, unless you’re a Metal musician. During the years, the city was quite popular for the musical avantgarde and Punk or even Pop. Really good Metal bands from the capital are quite rare, even though moving to or living in Berlin was a popular way to escape the German army during the 1980s. Maybe it is because of the city’s reputation as a place for alternative lifestyle and people who are politically left wing, while Metal still seems to become more and more conservative. So it is always nice to hear fine Metal, Death Metal in this case, from Berlin. DEHUMAN REIGN is a quite new band, around since early 2012 in this line-up, but the members of the band are quite experienced. Their aim is, according to their facebook site, "World Domination"… Well, with this first mini album "Destructive Intent" they are on a good way. From the short Intro ‘Prelude To Perdition’ onwards, DEHUMAN REIGN take no prisoners and celebrate the old school of North American Death Metal, which was made popular by bands like IMMOLATION or early SUFFOCATION before they started to become more and more technical. DEHUMAN REIGN are definitely good musicians as well, with all the skills you need to play brutal and fast Metal of Death with ferocious blastbeats and fuckin’ hard grooves. If that’s what you want, songs like the blastbeat monster ‘Extinction Machine’ or the fierce ‘Irreversible Soul Consumption’ are definitely your weapons of choice. But ‘Staring Beyond The Edge Of Time’ or ‘Veil Of Ignorance’ are as classy, the final band anthem ‘Masks Of Sorrow’ with its merciless groove in the end is even a little better – my personal fave on this already damn fine mini album. If you dig straightforward and brutal stuff, you can’t do anything wrong when you check out DEHUMAN REIGN. More info at www.facebook.com/dehumanreign or www.fda-records.com