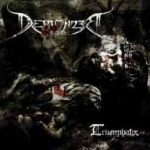 Let the battle begin – “Triumphator” is the third release from the Belgium horde DEMONIZER and they have recorded an album with the absolute amount of aggression; so without a mocking undertone the perfect release for our friends from Folter Records. There is no point of rest, nor acoustic guitars or any ‘plastic’ effect just pure Metal blood in form of good performed Black / Thrash Metal. I’m not the biggest fan of this style due to the fact that after a short while nearly every release is struggling with the problem of similarity and DEMONIZER can also not completely avoid this weak spot but the overall impression – after the 9 songs of “Triumphator” – is that of an album which will crush all enemies and the only remains will be barren soil. Think that everybody should by now have an impression of “Triumphator” – so don’t blame me if the Belgium thunderstorm will force you to turn down the volumes – you had been warned. www.folter666.de