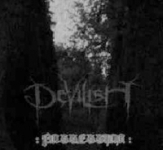 From German lands arrive DEVILISH, an almost unknown act to me, as I don’t have too much information from them, but it seems they recorded this album some years ago. Now the German label Eisenwald releases it as a digipak with really good artwork, on black with silver ink, as well as a small poster with the pictures of the four guys, hand numbered and limited to 350 pieces. But let’s speak about the important thing here, which is the music. With a Black Metal oriented sound, DEVILISH choose a raw and a bit depressive sound, with strong atmosphere, which is, helped by the keyboards, highly present on this recording, but not as much that it becomes epic or pompous. In fact, they approach them to Pagan sounds for being slightly medieval, in the way of SUMMONING, even if it seems that I’m obssessed with that band for naming it often, but they came to my mind fast; I could mention the old EVOL too, which had a middle age influence too in their songs, and a similar composition, with midpaced parts and some faster ones, the keyboards and the raw but quite understandable vocals. They even remind me a bit of BETHLEHEM on their last song, which is the most depressive one and which starts and ends with weepings. But in fact I should speak more about parts than about tracks or songs, as the album is supposed to be only one long track, even if the parts are really separated and distinguished. About the production, even if it is not really raw, it still keeps closer to that register, with dirty and monotonous guitars, as well as pretty low drums which is not so easy to hear, except when the guy hits the cymbals, which are quite high and seem to have some reverb on them. Without being a really original band, they posses some good, dark and enveloping atmosphere, a German sound, which maintains a big charge of feeling even if it is quite simple, and which keeps a distance to brutality and most primal aggresiveness. I can only say the album is quite short with only thirty minutes and it’s finished really fast when you start to enter it. www.eisenton.de