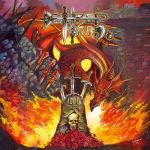 DEXTER WARD are an Epic Metal band from Greece, featuring two ex-members of BATTLEROAR, guitarist Manolis Karazeris, who also organizes the Up The Hammers Festival, and the Italian singer Marco Concoreggi, here under the alias Mark Dexter. The band’s lyrical inspiration clearly comes from the old fantasy realms of pulp authors like H. P. Lovecraft (who wrote the story “The Case Of Charles Dexter Ward” back in the 1920s) and Robert E. Howard, whose references are also very much present in the lyrics – the fifth song’s very name is ‘Conan The Barbarian’! In fact, nothing here hides the passion for their driving themes: the very explicit song titles, such as ‘The Eyes Of Merlin’, ‘The Demon Slayer’, or the very melodic and Viking inspired ‘In The Days Of Epic Metal’; all of the artwork, a total pastiche of the most obscure Heavy Metal bands of the eighties (including their logo); and, most of all, the music itself, extremely epic, teeming with choruses, melody and weight. For in spite of the acoustic intros with keyboards and all the guitar arrangements, this is mostly heavy, and fast. ‘The Eyes Of Merlin’, for instance, begins with beautiful MAIDEN like guitars at their mellowest, and soon develops into a full-blown cavalcade with great, assertive riffs and inspired vocal tunes, to briefly return to a calm and contemplative mood before resuming the march. Befittingly, the songs are often very classical driven, with majestic vocal passages since the first track and throughout the album, until the finale, gone full opera. All these ingredients add up to an album with much poise and solidity, and definitely a journey deeper into the realms of epicness undertaken by DEXTER WARD. In fact, they seem to be furthering into their quest for their definite sound, with long, complex anthems and strengthened delivery. Their fervour shows in this third effort, arguably their best achieved album to date. If you do not listen, then to hell with you! www.facebook.com/dexterwardmetal, www.noremorse.gr