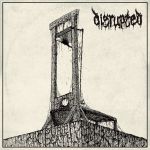 DISRUPTED is a Swedish Death Metal band from Ludvika, Dalarna, Sweden. Yes, they’re from the same homeground as HYPOCRISY! The version being reviewed is the CD pressing by Memento Mori Records. DISRUPTED is a traditional band, as they stick true to the Swedish sound that we insanely loved, then got bored and then didn’t mind. The band has no secret mantra in their arsenal, they stick true to the sonic sphere of HM2. We’ve had bands pop up not necessarily from Sweden, BRUTALLY DECEASED as an example, who stay to the boundaries of the traditional sound of GRAVE and ENTOMBED. DISRUPTED is simply a band of more or less the same caliber that does not stray come what may. The band is tight, the music is enjoyable, but not really memorable. There’s nothing really much to say about the Swedish sound that’s not already said before, DISRUPTED ensure they tick all boxes in “Pure Death”. The production is appropriate, we’ve got Nick Holmes guesting on the track ‘Total Death’ and a rather funny video for ‘Chopped Into Oblivion’ which features a kickass solo from Tomas Åkvik. The standout of the album are the vocals, incredibly deep, very engaging and really well done. I would’ve loved some melodic solos thrown in time and again which would’ve raised this album up by a notch. The musicianship is exactly as needed, there are no special effects anywhere, they fit in with one another well. If we’re objectively looking at this album on its own, it’s a decent release. All said and done, this is a fun tribute to the traditional sound, nothing wrong with it. For more band information please visit: www.facebook.com/disruptedofficial, label contact: www.facebook.com/memento.mori.label