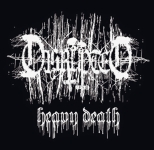 The Swedish old school Death Metal formula has been over exposed throughout the last decade for good in a huge quantity of cases and for bad in some cases. But this time we’re facing one the best that Sweden has exported in the last years. This five piece act has delivered an awesome debut demo (yes, on cassette format, as all the demos must be released) now presented to us on CD format, thanks to the Chilean imprint Apocalyptic Productions after selling out on tape format in no time. Well, these youngsters present us 6 tracks of old school Svensk Dodsmetall in the pure Stockholm / Sunlight tradition with clear influences of DISMEMBER, GOD MACABRE, (early) ENTOMBED and EDGE OF SANITY, fulfilled of sheer violence and intense riffs with low vociferations where tracks like ‘Reverse The Cross’ or ‘Suffocation Molestation’ will catch the interest of all the old school Swedish Death Metal maniacs. The only thing that disappoints is its short length, only 15 minutes with 2 ½ minutes in average for the songs, reminding me of another unknown young Stockholm five piece band called NIHILIST. All in all this demo / CD has made a very good impression on me and other media people with only good reviews around the world. Various record labels wanted to sign them for their debut longplayer, but the chosen ones being the lucky bastards of Memento Mori (Hi Raul), so act fast getting this collector’s item because the upcoming plague is scheduled to be unleashed upon mankind in May 2015. For all additional DISRUPTED information check out www.facebook.com/disruptedofficial, www.facebook.com/apocalyptic.zineprods