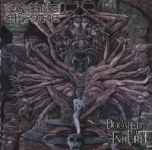 More American Death Metal with little character and interest! Displaying, once again, a high level of musicianship, DIVINE EMPIRE hit the Death Metal nail on the head quite well and quite hard but once you scratch beneath the surface, it feels like another US Death Metal record you could perhaps have done without. There’s nothing particularly wrong with it as such – the production is super heavy, very brutal and it belts along like no ones business but now that Death Metal has arisen once again from the nether regions of the underground, the saturation process seems somewhat inevitable. This CD is somewhat reminiscent of CANNIBAL CORPSE, BOLT THROWER (for the chugging, slow / mid paced passages) and DEICIDE. And whilst that may seem a good combination of influences in theory, I would have to say that it doesn’t exactly lend itself entirely to assisting in the creation of a really great record. In closing, I would have to say that DIVINE EMPIRE is middle of the road, acceptable Death Metal without much flavor – executed professionally but not reaching those levels desired when listening to music of this nature.