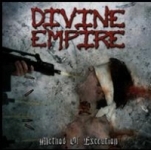 Wow!!! I knew from DIVINE EMPIRE’s previous releases that they are able to create some killer Death Metal, especially their first two albums are excellent, but "Method Of Execution" surpasses them all!!! This truly almost an hour long monster (no hidden tracks or shit like that) is more brutal, better produced, more diverse and inventive than "Redemption", "Doomed To Inherit" and "Nostradamus", which I consider their weakest effort to date. Where other bigger bands of the Death Metal genre either stagnate or bore (like recent CANNIBAL CORPSE and MALEVOLENT CREATION) DIVINE EMPIRE offer masterly compositions covering everything from thrashing drive to shredding heaviness, crushing groove and surprising melodic ideas. The opener ‘Vowed Revenge’ violently shocked me with its atmospheric keyboards, but it changes to a more thrashing speed afterwards, other songs like ‘Surgical Strike’, ‘Shadow Of Violence’, ‘Random Beheadings’ or ‘Judge, Jury & Executioner’ are totally in the MALEVOLENT CREATION – like style that dominated "Redemption" with lots of Thrash riffs, whereas ‘Kill The King’ or ‘Impervious Deception’ have some of the Black Metal – like chords "Doomed To Inherit" and "Nostradamus" featured at times. Musical surprises you might discover in ‘Dungeon Mask’ which starts as an ordinary, hellish brutal Death Metal track and turns very doomy and twisted later on, ‘Storm Of Hatred’ has some acoustic guitar parts and classic Heavy Metal leads to offer and the two instrumentals ‘Prelude To The Storm’ and ‘Reduced To Ashes’ leave the boundaries of traditional Death Metal as well. The latter, though seriously detuned, has a cool BLACK SABBATH – like groove, whereas the other one consists of acoustic guitars combined with some orchestral strings. Fortunately each of these different musical elements does not ruin the album’s consistency, but keep it from getting monotonous or predictable. Jason Blachowicz vocals are fantastic and vary between murderous growls, which dominate the album and his B/M – like screams, J.P. Soars comes up with numerous, very good riffs and Duane Timlin does an incredible job behind the drum kit. In addition to that, the production is like the icing on the cake and sounds powerful, timeless and not too polished, Mr Staska I love you, haha! But, all joking aside, I can’t hide my enthusiasm about "Method Of Execution", it has everything a killer Death Metal album needs to have and the only weaker song ‘Terror Zone’ is easily compensated by the dedication and creative potential the other songs emanate. Who enjoys Florida Death Metal or generally contemporary US Death Metal that has a great balance between interesting musical ideas and sheer brutality to offer should watch out for this grand release. It should be out at the end of April / early May! www.centurymedia.de; http://metalasylum.com/divine/