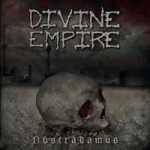 Ex-MALEVOLENT CREATION vocalist / basser Jason Blachowicz’s band DIVINE EMPIRE was another victim of Olympic Records going bankrupt and being bought up by Century Media, because it resulted in the delay of DIVINE EMPIRE’s anticipated third album “Nostradamus”. Where “Redemption” (1998) was traditional US Death Metal, “Doomed To Inherit” (2000) expanded DIVINE EMPIRE’s repertoire with more surprising song ideas, almost Black Metal-like screams and overall more variation. “Nostradamus” follows this tradition and delivers on one hand another dose of straight brutal Death Metal combining classic Florida aggression with some blackish screams and melodic leads, but on the other hand adds a couple of new elements like quite modern sounding grooves and rhythms to the mix and shows that DIVINE EMPIRE are certainly not a band that stands still. My opinion on “Nostradamus” is a little torn apart, I like the album when it goes fast and brutal and the old school elements step into the foreground, but the modern riffing in ‘Manifestation’ or the boring instrumental ‘The Pain Remains’ just suck!!! Fortunately due to songs like ‘Season Of Extinction’, ‘Ravaged’ or the melodic yet speedy killer track ‘Aggravated Battery’ the good parts dominate this half hour of brutal contemporary Death Metal, but still I am a little disappointed. If you enjoyed in particular the “Doomed To Inherit” album, I guess you will be happy with “Nostradamus”, too, but you should be ready to face some surprises… Visit www.metalasylum.com/divine/ or www.centurymedia.de for additional info and sound files.