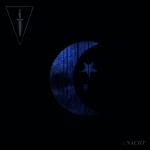 “Nacht” is the second part of (DOLCH)’s album trilogy after “Feuer” and it seems as if the Berliners have found each other even more. With “Nacht” (DOLCH) is celebrating its eclectic, gloomy, ethereal gothic droning doom sound way more than you would expect. “Bleak” could be a key word for (DOLCH) because everything the listener gets to hear on “Nacht” is dim and full of great melancholy. ‘Mercury’ is easily the standout track of the album, with simplistic but powerful drumming, borderline atonal and droning guitar melodies cascading over driving riffs, and serene and beautiful vocals by Rayshele Teige. In many ways, ‘Mercury’ reminded me of the maligned-and-misunderstood “Judas Christ” era of TIAMAT’s discography, having barely any traces of Metal except to remind you that yes, there were (and now once again are) a Metal band, yet have no problems showing off new influences if the songs are good. There’s a bit of cutting that would’ve benefited “Nacht” but it’s undeniable that the soundscapes on this record are absolutely mesmerizing and even at their most bloated they still hold a lot of beauty. Great record. http://dolch-band.com, www.van-records.com