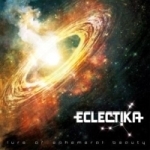 I’m all for the blurring of national identity in favor of one planet under Metal, but typically if I ever find myself in a musical identity crisis, I’m most likely listening to an French Avant-garde Metal band. I want to clarify that I mean this in the best way possible; I can be a real close-minded jerkoff so it is important to challenge people like me. If we all continued to judge Metal albums by the same criteria, we would miss out on complex jems like BLUT AUS NORD and ALCEST. Both of which, of course, are French… This release by ECLECTIKA combines progressive elements with some rather familiar ones; heavy synthesizers juxtapose clear guitars and oscillate from dense to simple arrangements while the percussion seems to be a duel between the efforts of both man and machine. The band also boasts two distinct vocalists: a male Black Metal-styled growler and a classical female singer. Like the rest of the contradictions within the band’s sound, it provides an interesting perspective as to the strengths and weaknesses of the various styles at effectively conveying various moods within the songs. The best example of this going rather smoothly is track 9, the aptly named ‘Handicapped Sex In A Mental Orgy’. The song has a slower and more melancholy feel than the rest of the album while allowing each vocal effort their own individual peaks; the other tracks will have both vocalists do a little more back and forth, which makes the songs somewhat operatic and often devolves into a sort of "muppet musical" which reminds me of FUCKED UP’s later albums (I actually like this about them). Overall, this is a challenging album not only in the sense that it contradicts what we believe to be Metal, but rather that the complete experience is one of musical schizophrenia. And when I say "schizophrenia" I mean it more like how everyone watching "A Beautiful Mind" believes the delusions to be real in the beginning and then you get just as confused as Russel Crowe when you find out your friends are imaginary. There are two worlds of music coexisting and then separating again until you forget what the reality is. ECLECTIKA seems to be quite comfortable with this role. Tracks 6 and 7, ‘Trauma 835’ and ‘Sweet Melancholia’ respectively, solidify this notion as we plunge into an experimental noise nightmare scape and then are revived to the sounds of what could be on the soundtrack to an early Peter Jackson movie. There’s no rule that says you need to pick a path and stick to it and for some, it is all the swerving that tends to be the fun part. www.eclectika.fr, www.facebook.com/pages/eclectika/53862508220, www.asylumruins.fr