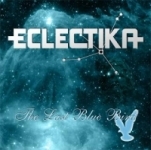 France – La Grand nation which invented famous things like Devils Island and the Guillotine is since some years not longer a white place for all Black Metal fans.With bands like ANOREXIA NERVOSA and MERRIMACK to name just a few the first wave swept through whole Europe because they try to avoid the well known "Pathes Of Sorrow" of Black Metal. With ECLECTIKA’s debut on the small French label Asylum Ruins (the label of the Main Madmen of ECLECTIKA) a further band tries to establish a new force in France. The 9 track debut offers a wild mixture of different styles but to avoid the click of the return button of all readers the band offers something unique which is the most important thing after nearly 20 years of Black Metal releases. ECLECTIKA’s define their style as Black Thrash Ambient and the term is not too far away to fix the style even if the aggressive percentage isn’t too big, imagine one of the famous Holy Records bands from the midth 90s where atmosphere was more important than aggression. I’m not the biggest fan of special term’s if we are speaking of Metal (because Metal is the law!!!!) so to keep a long story short the major part of the album is good played Black / Doom Metal added by good solo’s and a big portion of space ambient parts to deepen the atmosphere issue. The ambient songs offer places of rest instead of a trip to the darkest places in space like LIMBONIC ART are offering. The vocals differs from pure Black up to ANDRAS like extreme vocals added by some female vocals and combined with the above mentioned details give this young band a chance even if you need 2-3 rounds with the debut because nobody can’t invent the wheel a second time but it’s much more difficult to realise your own musical ideas instead of just coping your most famous band and produce the second thousand pure Black Metal clone. www.eclectika.fr, www.asylumruins.fr