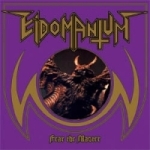 From time to time the gates of hell are opening and from the very depths there appears… well, at least some fine piece of vinyl like this one! After two demo-tapes this Swedish band presents us now their second 7" release. The history of EIDOMANTUM goes back to the year 1998, when the band was established after the split of the predecessor LUKEMBORG. The reason why they did just those four releases within eight years is unknown to me, I wished they would release more stuff. The music is the typical Swedish melange of Death / Black / Thrash Metal, performed the old school way. So if you like this kind of style, you will not be disappointed by this release. This output is definitely breathing the ancient spirit, no polished mainstream stuff here. No digi-pack, no extra version with bonus songs, no special fan-edition with gimmicks, no best-of, no reunion affectation. Just a fine piece of black vinyl with two great Death Metal songs. The price is unknown to me, but do not hesitate to get in touch with the band or the label. Contact: http://eidomantum.cjb.net/ or eidomantum@hotmail.com or R. Lagergren, Salixvägen 2B, S-29141 Kristianstad, SWEDEN. Label contact: www.ihate.se