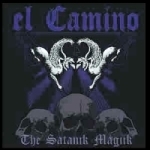 From Nässjö, Sweden, hail these 5 pot smelling hippies, also better known as a group carrying the name EL CAMINO. The band was formed in the winter of 2002 / 03, taking a primary life’s task of theirs to spread the message about wonderful worlds of culture, occultism, history and overall a bit darker sides of our existence generally. Their weapon – or weapons for it, is (are) some sort of a pimped fusion of Doom Metal, Stoner Metal and 70s Rock musick. A couple of demos and one EP ("Satanik Magiik") have already come out under their belts, and the guys’ first ever full-length titled "The Satanik Magiik", was released on a small Swedish label Night Tripper Records around on April 2011. Speaking of the musick itself on "The Satanik Magiik" now, to me EL CAMINO sounds more like a grinding – and more dark-themed version of BLACK SABBATH, in which our dear dark, mighty lord Satan wants to keep up a wild party spirit all the time. The whole album sounds actually a darn entertaining – almost dancable even, with its strong 70s flavored feeling, great atmosphere and ominous goings-on that this particular record is pretty much loaded with. EL CAMINO could be like that evil lil’ brother of BLACK SABBATH that has simply refused play around ‘just nicely’ but rather wants dangerously to play with fire, without caring much whether they could burn their fingers at that game or not. Got it? You didn’t? Hey, don’t worry – me either. "The Satanik Magiik" is anyway a ridiculously catchy and additive record from start to finish; kind of like a messy acid trip for a drug addict through paradise straight to hell. Good, such a good stuff here – actually a whole plateful of it. www.myspace.com/elcaminomusic