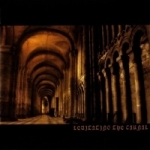 The temperature has dropped dramatically would be a very suitable start for this review because it’s unavoidable to connect ELYSIAN BLAZE’s "Levitating The Carnal" (originally released in 2006) with their debut "Beneath Silent Faces". Mutatiis second strike has become a much darker creation, the color lightgrey (see the debut review) isn’t appreciable any longer it’s for sure black without hope for any kind of light. The seven songs are very intensive and I think that it’s definitely "music" for the dark half of the day, close your window; light a candle and enjoy the trip. If there was any Ambient / Black Metal release within the last 12 months which should be consumed only by real fans of this musical direction it’s for sure "Levitating The Carnal". The album is like a soundtrack to an old Horror movie, it’s breathing through the eerie atmosphere but the real Black Metal moments are a very rare issue. Due to this fact think this album will find only a small group of Metal supporters and at I’m at the end not completely convinced about the necessity of this re-release. www.osmoseproductions.com