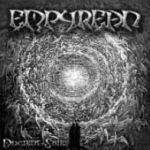 If I hadn’t known it before that this band hails from the United Arab Emirates then I would either bet on Sweden or Finland. After the indulgence of their debut EP "Ancient Skies" I was really stunned by their music and I automatically pressed the repeat button of my CD player. These youngsters (one girl and three boys) from the Emirates deliver us excellent stuff! The band saw its light of day in September 2003 under the monicker of IMPURE but they had to change their name into EMPYREAN due to copyright reasons. But the name fits perfectly to their music. If you take a look at their band photo you will not believe that this quartet (they are looking for a drummer right now) managed to unleash four really strong own creations which sound already very mature. The tracks are mostly midpaced and can convince by a very intersting blend of Black / Death mixed with a heavy dose of tradtional Metal and an oriental touch. The band labels itself as a progressive Metal band but I wouldn’t go so far. Furthermore this squad is a kind of frisky Black / Death with the right balance between melody and heaviness. Yes, despite of all finesse the material is heavy heavy enough and so you can hear not even once some cool doublebass parts or heavy riffing. The keyboards are used effectively and never sound annoying… it’s just the opposite, as the synths underline and highlight the songs in an excellent way! But the emphasis are the guitars! The guitarists really deserve best notes as they are excellent and know how to fascinate the listener with their fresh leads and harmonies. You can also hear some nice oriental melodies which are incorporated in their play. The sound quality of this demo CD is really good… even more if you consider that the band just recorded it in their homestudio. It doesn’t matter if you check out the good opener ‘Death Whispers’, the driving ‘Resist’, the cool ‘Ancient Skies’ (with its mix of calm parts / normal vocals and heavy riffing / doublebass & blackish vocals) or the last track ‘Shores Of Acheron’ with a cool keyboard melody line. Fans of Scandinavian bands like CHILDREN OF BODOM, KALMAH, lighter OPETH, a heavier version of Israel’s ORPHANED LAND or other usual suspicious bands are welcome to check this talented band out. If the band can manage to create 4 or 5 more songs in the same quality and put some more coals to the production then I can imagine that some wellknown, hyped bands are able to go home! Well done girl and boys! www.empyrean.phride.com.