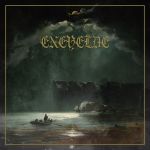 ENEVELDE is Norwegian and is roughly translated “absolute monarchy”. Quite fitting for Mr. Kråbøl as he is the sole member of this one-man-band and therefore undisputed King (and all other jobs) of his own domain. He is also the singer of MISOTHEIST and King as well according to Metal Archives. A double King so to speak, with cheese, onions and extra fries. But we stay with ENEVELDE and start with the cover: a very atmospheric and moody painting, reminding me of Arnold Boecklin’s “Island Of The Dead”. The artwork sets the perfect tone of things to come: four 8 to 10 min. long tracks of well played 90s Black Metal. No keyboards, no triggers, old school sound. It would very well fit in your tape collection between the Norwegian Black Metal pioneers and the albums “Shadowthrone”, “Svartalvheim” or “Dark Waters Stir”. Track one ‘Kroppens Mani’ starts doomy with dissonant and thornslike guitars, gets into blast mode soon and shifts between that and double bass passages with those melodies stretched over a couple of beats. Then, when other bands would have cut the song, it goes back to doom and atmospheric mid-tempo riffs again until repetitive guitars accompany us to the end with that this-could-go-on-forever feel. You know this BURZUM effect where you simply get lost in the monotony of sound and riff. This is pretty much a good summary of the rest of ENEVELDE’s first full length! Track two starts slow with a perfect riff which could have been created by SATYRICON and DARKTHRONE likewise. No blasts here, just cool atmosphere with simple bum-chic drums and chunky vocals. The singer of WHOREDOM RIFE was briefly allowed into the country here to grab the mic and grunt some hails to the king. Those and the vocals of Mr. Kråbøl himself are more deep and shouted then high pitched and screamed and fit the music well. Track three and four speed up the tempo again but often return to mid-paced and atmospheric passages. The last track features some guitars by MARE guitar player Nosophorus and is my favorite of the four. All in all a very solid performance! “Enevelde” is a mature debut record – a chunky homogenous production, which focuses more on atmosphere than on power, combined with the very nice cover round it all up, with spikes and torches that is. The King has his cold, grim and foggy country absolutely under control and shows no interest whatsoever in conquering neighbouring territories. www.terraturpossessions.com