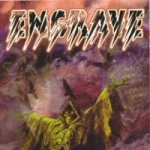 If you read our interview with COFFIN TEXTS you should already be aware of this band, as COFFIN TEXT’s vocalist / bass player Robert Cardenas is also fronting ENGRAVE. The band’s line-up is completed by ex-members of the LA band BRAINSTORM (Emilio Marquez on drums – nowadays with SADISTIC INTENT, Mario Gutierrez and Eddie Gomez – both on guitars) and they recorded their first demo in 1997. About a year later Sounds Of Death Records released a MCD by ENGRAVE, entitled “The Rebirth”, which features five songs, plus the old BRAINSTORM instrumental ‘Storm Of Obliteration’ and a SLAYER cover (‘Evil Has No Boundaries’). I don’t know what exactly happened then, maybe Sounds Of Death Records went down the hill or something, fact is that “The Rebirth” has just been re-issued by WWIII Music with a slightly changed track list. The SLAYER cover got replaced by ‘Liar, Deceiver’ – a track from ENGRAVE’s 1999 “The Infernal Bleeding” demo, and there’s also three additional demo tracks of great recording quality on here (‘Minister’s Nightmare’, ‘Full Moon Rising’ and ‘Morbid Dream’). The CD title was enlarged to “The Rebirth – Remasters”, so I suppose that the original recordings got remastered for this re-issue (clever conclusion, huh?!). Nevertheless – the musical quality on offer here is just great. I always loved Robert’s brutal, yet very expressive vocals immensely (they actually remind me a bit on Bay Cortez of SADIST INTENT), while the overall musical style of ENGRAVE is a lot closer to the old Speed / Thrash Metal of the 80s. Imagine something in the vein of “Bonded By Blood” meets “Show No Mercy” with an overall more brutal vocal approach and you almost get the picture. Really unique stuff, performed by a bunch a very dedicated and skilled musicians, so make sure to check this out! Label contact: www.ww3music.com