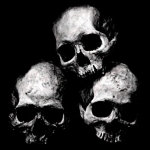 This compilation features the first two albums by ENOID, a one-man Black Metal band from Switzerland. Originally released in 2006 and 2007 both recordings have been remastered and put together as one output. Since I do not know the original sound the remastered version works pretty appropriate. The music is heavily influenced by early / mid nineties Scandinavian Black Metal and interestingly the band’s history goes back to that era. Being formed as PEST back 1996 and active under the monicker ORGAN TRAILS the person now named Ormenos is no newcomer to scene. Besides his own band he was active in some other, at least to me less known acts. One-man projects are quite common in the Black Metal genre, maybe the reasons are the heavy emotional connections to the music and the tendency to despise the most other or even all human beings. Appropriately enough the lyrical theme of predecessor ORGAN TRAILS is declared "Anti-human". Referring to Metal Archives it has now changed to "Death, Misanthropy, Reflections". But before starting a discussion about the difference between anti-human and misanthropy or why Black Metal, in comparison to other genres, is the only one with so many one-man projects, a few words about the music. Obviously "Livssyklus & Dodssyklus" (translated life cycle & death cycle) is supposed to be some kind of concept, so it makes sense to put them together on one output. But the music differs by no way between the two albums. Listening to all tracks in one row does not give you any chance to make out which, in words of the band, cycle is currently spinning. The riffs are blurred like the early ENSLAVED used to play, but more in the aggressive vein of EMPEROR or DARKTHRONE during their blackest stage ("Under A Funeral Moon" and "Transilvanian Hunger"). A gnarling voice teams up with sharp hitting drums. The songwriting is changing between mid-tempo and up-tempo, having heard one song you know all songs, so to say. Since there are no surprises, which means no unpleasant ones as well for me as Black Metal fan I have nothing to criticize. For more info visit www.facebook.com/enoidblackmetal, www.satanath.com/distro