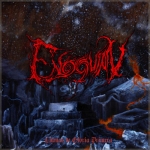 Finding unexplored Black Metal propagated from the heathen soil of South America has always been an enthralling matter and if you search in the right places, you can find some outlandish surprises. South America has been renowned for the nefarious extreme Metal that comes out of its entrails, from the distant albums of SARCOFAGO and SEPULTURA, to the darkness of PENTAGRAM and MYSTIFIER and the inflicting savagery of IMPURITY and VULCANO. From the caverns of South American extremity, Argentinian Black Metal band ENOQUIAN are a relatively new band (formed in 2015) from the city of General Roca in the province of Río Negro and there are only two men in the band (guitarist / vocalist F. Dieser and drummer F.T), though they sound like an absolute uncanny force. They have recently released their debut album "Llamas De Gloria Primera" – through the Russian label Satanath Records in coalition with Morbid Skull Records of El Salvador. In early 2016, they have released two promo tracks. Then ENOQUIAN entered the El Otro Lado studio and recorded their maiden effort. “Enochian: The Mysterious Lost Language of Angels” has been the sought after context in the last 16th century. The word “Enoquian” is a Catalan dialect, which turns into “Enochian” after translation. It is unknown whether the band name was inspired by this medieval history but the Spanish titles of the tracks and the symbols we find in this album and inner booklets are full of mysticism and anti-Christian diatribes, and this is just the prelude to what is coming. A brief moment of unnerving and rumbling ambience sets the tone before the fury explodes. Raw unbridled energy and spirit will penetrate the cerebral from the moment of initiation. Some thrashy or Death Metal influences creeps in through when you least expect it, but throughout the album, they stick to the similar arrangements: diminutive moody intro, then releasing the hounds of devastation. However, there is always enough diversity in the tunes and moods to keep each song fresh, and some of the introductions create a genuine vibe of dismay and dreadfulness that only enhances the grimness that follows. The raw and aggressive sound is definitely reminiscent of the classic and traditional Black Metal from the hideous existences of the 90s. The union of a crafty drummer and a guitarist / vocalist who achieved this sound while keeping the traditionality alive is somewhat astounding. Bearing in mind, the possible creative limitations that such arrangements may have, F. Dieser’s guitar succeeds to fill the environment with abridged riffs, sometimes a little thrashing from the intro of demonic voices in ‘Poderes Perdurables’ to the last note in ‘Equilibrio’. This album is a voyage through melodic yet dark musical passages, which based on the tremolo picking of F. Dieser and bewildering rhythm sections by F.T. is purely excellent. All this undoubtedly nods the inner understanding and experience of both musicians. The alternating highs and lows of the vocal, which sounds like cacophony of wicked screeching and roaring, certainly recalls the vocal style of Death Metal in some moments while the atmosphere builds tension and it transports a warning of violent and blood-freezing experience which will submerge all through merciless Black Metal attack. “Llamas De Gloria Primera” which means “Flames Of Glory First” is aptly carrying the inner message this record beholds and all the admirers of BEHEXEN, DISSECTION, MAYHEM and other traditional Black Metal bands and those who explore the South American Black Metal, this record will obviously be a well worth listening experience. Visit their Bandcamp page. Label contact: www.satanath.com