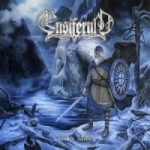 ENSIFERUM are from the commercial point of view without a doubt one of the most successful bands of the Pagan Metal genre and far away from any underground credibility. But musical quality still counts double so we will forget the commercial machinery which is working without rest at least since three months and fully concentrate on the important part of “From Afar” – the music. After several successful tours throughout the world ENSIFERUM is still playing a very epic Pagan Metal with a lot of reverences to traditional Heavy Metal. But the band didn’t change their course to more sheltered coasts they are still a Metal band and “From Afar” is first of all a great album with good songs and a lot of interesting ideas. The album starts with a fantastic intro which perfectly captures the overall atmosphere before the battle starts with the title track – a very fast and powerful tune maybe a little bit inspired by the new Battle Metal style. The first real highlight is the following track ‘Twilight Tavern’ with a great middle section and very interesting female chorus. Especially these parts show that the band has worked intensively on every song and these parts are making the differences. The forth ENSIFERUM release is for sure no surprise for all fans of the band – the band can prove again their status without presenting an album without edges or the complete denial of new influences (perfect example is the track ‘Stone Cold Metal’) but “From Afar” is also an ideal candidate for all new – or soon to become – fans of this style because this album is impressively summarizing everything this music stands for. www.spinefarm.fi, www.ensiferum.com