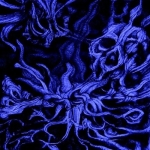 After two self-released EPs and participating on one split EP, ESOTERICA from Philadelphia release their first full-length album via Forever Plagued Records. ESOTERICA emerged out of the ashes of CHAOS MOON already in 2011 and present their interpretation of Black Metal. Crossing the borders between Black Metal and Funeral Black Metal this full-length shows the dark and depressive side of Black Metal. The presented 6 songs have a melancholic and haunting atmosphere which I enjoyed in the past from FORGOTTEN TOMB. The guitars, keyboards and vocals are balanced on the same level, so none of them is overdoing the remaining instruments, which makes the album sound very compact instead of overdoing keyboards sounding like an opera. The keyboard sound completes the atmosphere of the songs and the use of single samples fit in perfect in the songs. Especially when they slow down the speed like on the last songs, like ‘Lethe’ or ‘Womb’, the music and the haunted screams really freeze your blood. These songs strongly go more into the Funeral Black Metal direction and old FORGOTTEN TOMB can me mentioned once again to describe the direction. The last song ‘Aether Communion’ with its Rock guitar melody for me is the strongst song of the album as it shows the full range of their songwriting skills. A really strong debut which raises from song to song and ends up brilliant. As I didn’t really had huge expectations after the first song I got surprised and impressed more and more from song to song. Definitely worth checking out if you are into the suicidal art of Black Metal. As CHAOS MOON has been resurrected now as well, I hope A. Poole also continues on with ESOTERICA. For all further ESOTERICA information check out: www.facebook.com/esotericabm, http://esotericabm.bandcamp.com, www.foreverplaguedrecords.com