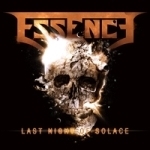 Danish Thrash Metal trio that has been around since 2005, won "Rock The Nation Award 2012", got the legendary Peter Tägtren to produce their follow-up album "Last Night Of Solace" – and who surprisingly sound a lot like a modern-day KREATOR; thanks mainly due to Lasse Skov’s vocal lines in the band. Yep, with this concept one could believe it would be very easy for ESSENCE to run quick forward into fame, and gain some ground for themselves among the Thrash Metal loving community even somewhat effortlessly. Well, in fact, that’s exactly what they should really do if the material that they have squeezed into this disc, just can work any optimal indicator for that. To me "Last Night Of Solace" indeed sounds quite much like later era KREATOR – like a mixture of KREATOR’s 4 last studio albums in particular: from "Violent Revolution" to "Phantom Antichrist". The guys in ESSENCE do know how to write melodic, modern and first and foremost catchy Thrash Metal songs that seem to stick to your mind almost right away, making you to play your air guitar, or humming a chorus part nearly instantly. No kidding fellow Thrashers, that good this Danish bunch actually does sound like – and it cannot be helped a bit with a thought they are able to move you even better than KREATOR with some of their songs. "Last Night Of Solace" contains over 53-minutes of very modern-day KREATOR-ish songs that welcome its listeners in with very high-profile and mature both playing – and songwriting skills, truly managing to offer more than just a couple of ace-of-spades songs only, and the remaining songs serving listeners sort of annoying, half-hearted fillers only. That’s gladly not the case with ESSENCE: everything’s done with a good taste, and the guys’ memorable riffs, choruses, hooks, breaks, furiously thrashing extravagance, etc., they all should make some of us envy this band for all their amazing potential they truly have in the band. "Last Night Of Solace" is a true top-notch follow-up record from the ESSENCE camp, and if you want to get lotsa mind-sticking melodies and thrashing goodness in one package, I think this album might well be your choice no. 1. this year. More about SOLACE at: www.essencemetal.com, label: www.noiseart.cc