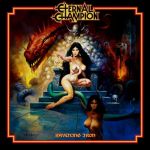 At this point of the year, the existence of the warlords of ETERNAL CHAMPION is not unknown, a band that probably brought us one of the best Epic Heavy Metal albums of the decade, the powerful “The Armor Of Ire”. After that milestone, they have brought over the table a couple of releases which detached from what they were doing, the 2017 EP “Parallel Of Death” which includes cover songs of LEGEND, from their almighty “From The Fjords”, and MYSTIC FORCE’s first EP “Take Command”. Then in 2019, they took a strong turning with a synth-instrumental release called “Terminus Est”, which confused even more the forthcoming steps for most of their followers, leading us to this point, where their sophomore album “Ravening Iron” showed the gates to an unknown dungeon. ‘A Face In The Glare’ is responsible for the opening fires, with a powerful and astonishing riffing designed to be infectious as the hammering drums fill the hall, thus showing the first steps of the stairs that leads to the unknown through darkness. As you keep descending, ‘Ravening Iron’ sets the tension through darker scales and dissonant subtleties, topping off with one piece of a chorus, fearful but pushing towards fight instead of fleeing as the song develops itself. ‘Skullseeker’ takes all previous doubts by the neck with strength and determination, returning to what ETERNAL CHAMPION knows best, that sense of power and will through Metal, but incorporating keyboards that thankfully are not overwhelming as the essence keeps the same even with this changes. ‘War At The Edge Of The End’ and ‘Coward’s Keep’ follows a similar path given the context, which develops more and more at each minute the presented warrior’s path. ‘Worms Of The Earth’ brings the speed and classic riffing at the bottom of the abyss, showing there’s still other lairs to be explored, with dual string work on the melodies that walks on the edge of Power / Speed Metal. But then, something happens on this journey at ‘The Godblade’, an instrumental song where a synth changes abruptly the champion’s pace, drowning it in mysticism and uncertainty in this dungeon. ‘Banners Of Arrai’ is the last dagger to write on dragon skin, another tale of the warrior, where a gloomy tempo and an epic soloing could make you think about Doom masters CANDLEMASS, leaving at the end an open closure for what’s about to come on a next chapter, hopefully soon. “Ravening Iron” explained this time the reason of their previous releases, being this the convergence of all the resources made by ETERNAL CHAMPION onto the halls of this second journey in about 37 minutes. It is also mandatory to mention the front cover, it’s pretty much the representation of what you could imagine as the hymns rages on, a hall with a dragon, some voluptuous ladies and a throne, but with darkness surrounding it with a mystery halo. The path of the warrior is eternal as some said. www.facebook.com/eternalchampion, www.facebook.com/noremorserecordsgreece