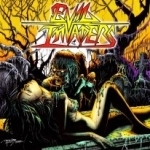 Remember the good old days of Speed Metal in the mid 80s? Those days are reborn with this record! EVIL INVADERS from Mol in Belgium (also the home of Grindcore legends AGATHOCLES) are out to revive Speed Metal. And they do it, as if the last nearly thirty years hardly ever existed. Started in 2007, these four guys recorded a 6-track demo in 2009, three of the tracks are featured here as well. After a four year break, they finally released their first record. This self-titled EP features six songs of 1980s Heavy Speed Metal, including those high pitched vocals and screams which were so typical for this era. Do you remember HAVE MERCY? Then you’ll know what I mean. Musically the only difference is not just the quality of the production, making their efforts sounding pretty fresh and not outdated. It is also the extremely good skills of the guys, especially bass player "Stringking Pussymagnet" (most stupid pseudonym ever!) knows how to play his instrument. His way of playing even reminds me of early Steve Harris in the best moments. IRON MAIDEN must for sure have been a great influence for EVIL INVADERS. Just listen to the instrumental song ‘Speed Invasion’ or the great band anthem ‘Evil Invaders’. But the definite highlight is already the opener. ‘Victim Of Sacrifice’ starts of like a train after an atmospheric intro. The drumming reminds me of old German Thrash legends like KREATOR or SODOM, the riffing is top-notch and Jöe offers brilliant vocals. But the following double speed attack ‘Driving Fast’ and ‘Tortured By The Beast’ are very fine ones as well. And ‘Alcoholic Maniac’ is a song about boozing that TANKARD haven’t done in this quality for ages. The whole EP is an absolute highlight of the current (and in my opinion overrated) 80s Metal revival. If you still like your old Speed Metal and play those classics like AGENT STEEL or ABATTOIR on your record player, you should check www.facebook.com/pages/evil-invaders-official/154641011249376 or visit the label-site www.empirerecords.be