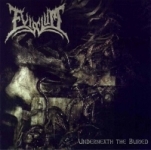 Listening to this 6 track effort by Pittsburgh’s EVISCIUM is another proof to me that we’re actually dealing with two different brutal Death Metal scenes… One of them used to be very healthy in the late 80s / early 90s, especially in Finnland and Sweden as well as in several places of the United States, with bands such as CREMATORY (Sweden), ABHORRENCE (Finland), old DISGRACE, old DEMIGOD, FUNEBRE, DERKETA, ROTTREVORE and the likes, while the other one is what we have today, with acts such as DEEDS OF FLESH, CANNIBAL CORPSE, KRISIUN, HATE ETERNAL and so on. Even though I really like a lot of the "new" bands as well, it’s still a lot more special to me to put on some classic stuff from the past. FUNEBRARUM was one of the first to come up with this great old style again and now it’s EVISCIUM to add some more fuel to the fire with their debut release "Underneath The Buried". If you’re familiar with the old ROTTREVORE material, you will definitely like this here as well because EVISCIUM is the logical follow-up to that band, lead by no one else than former ROTTREVORE guitarist / vocalist Mark Mastro! In mid 2000 he teamed up with John Scagline (guitars), a little later to be joined by Jared Altamare (drums) and DERKETA’s Sharon Bascovsky (bass). In October 2002 the band recorded their first demo tape, which featured the tracks ‘Cannibal Jihad’, ‘Ripspreader’ and ‘Unmarked Grave’. This raw recording was already proof enough of the obvious qualities of the band and made Poland’s Still Dead Productions sign EVISCIUM right away, with the intention to re-release the material. Unfortunately that never happened, but as all of the demo tracks (remixed, with partly changed vocal parts) as well as three brand new tunes do appear on this mini CD now, everyone should be pleased nevertheless. EVISCIUM easily capture the good old vibe of the classic Death Metal era, which is reflected in deepest grunted vocals, shredding guitars (that almost come across like a chainsaw) and a deadly pounding rhythm section. This overall sheer brutality is blessed with today’s technologies, so that the material even comes up with a cool recording quality. All in all this has become a great debut for fans of the good old times, even packaged in a very tasteful, yet morbid vein! All further info you may find at the band’s website www.eviscium.com. Label contact: www.stilldead.com