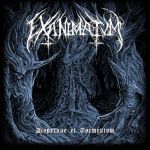 Just at the end of this winter (austral hemisphere) I got this extreme release from a southernmost band, and literally it’s southernmost, because Chilean Death mongers EXANIMATVM hail from Punta Arenas, the last city in the south corner of the American continent. Despise their location (and natural isolation), these guys have unleashed a true homage to brutality (not the band), with twelve hymns of brutal Death Metal with no additives, unrelenting aggression highly influenced by early efforts of IMMOLATION and INCANTATION, but to tag this band as a mere clone would be a total mistake, because the guys managed to mix their obvious influences into a personal way towards perdition, with suffocating riffs, sheer aggression, and a real dirty sound (not to be confused with a bad production, no, it’s a dirty sound that gives it a different flavour). The first 9 tracks of this recording were originally released as the “Dispersae Et Tormentvm” album through Germany based Dunkelheit Productions in late 2016 and this re-release under chilean based Canometal Records has been unblessed with the whole “Diabolia Gratia” EP (2014 – Kuyen Prod / Swear Of Satan) and completely remastered by Pablo “Hateaxes” Clares at DM6 Studio. After listening to it for the first time local names such as DEMONIC RAGE or ISTENGOAT came to my mind, but after listening to it again a couple of times more their own identity can be clearly seen, with such tracks as ‘La Apoteosis De Todos Los Horrores’, ‘Dispersiones Y Tormento’ or ‘Negra Iniciación’. Another point to highlight is the use of the Spanish language in a brutal way, not the monotonous and mono layer way it used to be done in the past years. Not being a total must, this album covers my need for brutal stuff. Totally recommended to insane minds looking for occult dark Death Metal the way it must be. www.facebook.com/exanimatvm-1654489184769196, www.canometal.cl 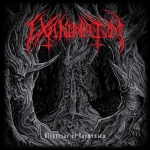 I think most of you know by now that the Chilean Metal scene is not only one of the most flourishing ones in the past years, but also one of the most interesting. With “Dispersae Et Tormentvm”, their first full album after two EPs, EXANIMATVM now put their name on the map. A name that’s worth remembering, judging from this album. “Dispersae Et Tormentvm” will not change the world of Metal in common or the world of Death in particular. But the longer you listen to the album, the more fine it gets. EXANIMATVM are very good at varying the speed and the groove of their rude and brutal Death Metal. In addition, they know how to evoke the spirit of early 1990s Metal of Death, a trademark of recent Chilean Death Metal. If you want to know what I’m talking about, check the the mostly fast and rabid opening duo (after a long intro), ‘Vae Victis’ and ‘Danza Impura’ with the latter proving the bands ability to place sudden speed changes. The quasi title song ‘Dispersiones Y Tormento’ (the Spanish version of the Latin album title) is a perfect example for the slower and groovier side of EXANIMATVM and ‘Nocturnas Luminiscencias’ proves that the four piece knows how to play long and yet variable songs. In result, as I said, all of this is not revolutionary or renewing, but refreshing and revitalizing. So, there’s no reason for a Death lunatic not to check out EXANIMATVM at www.facebook.com/exanimatvm-1654489184769196 or http://exanimatvm666.bandcamp.com. For a further look at the label, visit www.dunkelheit-produktionen.de