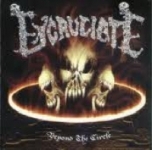 Well, I like compilations on which all material of a particular band is assembled and especially in cases where the demos of a band become remastered and rare stuff appears in vast amounts, such releases are extremely valuable. "Beyond The Circle" released by the Singaporean label Konqueror Records covers the whole discography of the more or less known Swedish Death Metal legend EXCRUCIATE, who released the great "Passage Of Life" album (of course recorded at Sunlight Studios) in 1992 on French Thrash Records. Songs like ‘Eternal Incubation’ or ‘Sabbath In The Mortuary’ are classic tracks of Swedish Death Metal, but unfortunately EXCRUCIATE died prematurely… They left behind the "Mutilation Of The Past" demo (1990), which features first-class session vocals by THERION mastermind Christopher Johnsson, the split LP with EPITAPH (1991) and the two tracks recorded under the moniker KORGÜLL, which later melted to form the aforementioned track ‘Sabbath In The Mortuary’. Now, in 2003, EXCRUCIATE’s efforts mount in this nice DoCD, which contains the "Passage Of Life" album in its original dark "beauty" on disc one and the previously enumerated releases on disc two. Especially the "Mutilation Of The Past" demo and the tracks of the split LP are worthwhile songs of Swedish Death Metal history and sound-wise absolutely great! The raw spirit, the driving aggression and morbid feeling of EXCRUCIATE perpetuates on those two discs and Konqueror Records efforts to reissue this stuff need to be honoured here. The only thing that might have been better is the booklet, which has a nice layout, but only offers information on the various recording dates and line ups, but not a biography of the band, which might have even told us, what the guys are doing now (you will all find out shortly in an interview to be published here – Frank). So if you do not already own this stuff and have a particular interest in the early 90s Death Metal scene this DoCD should fit well into your collection! Contact Konqueror Records via Email: konqueror_records@hotmail.com or snail mail: Konqueror Records, P.O. Box 141, Toa Payoh Central, Singapore 913105.