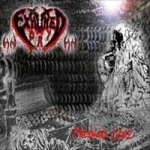 EXHUMED DAY is a Black / Death Metal four piece from Spain that previously already released one album (“Convulsion”) somehow, somewhere, sometime… Musically they do nothing to me at all. The material featured on this promo CD-R (3 songs + intro) is supposed to be a little taster of their upcoming second album “Madness Symphonies” and judging the band only by that I can just conclude that they still have a very long way to go. Poor production, average musicianship and rather boring songwriting. Most parts of the vocals are very much in the Black Metal vein (by the way, I bet that there’s almost no lyrics at all in ‘Time To Relax’ – at least it sounds as stupid as that), while the music is quite thrashy with additional keyboards and even female vocals in ‘When The Soul Will Leave Me’. A mixture which certainly won’t work out for them on the long run, I’m totally sure about that. Sorry, but there’s simply way too many bands of superior quality around these days. If you still would like to get in touch with them here’s their email address: exhumedday@mailcity.com