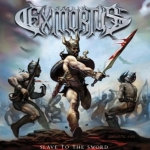 Californian Metallers EXMORTUS have gone a long way since the early demo days of the band, numerous line-up changes, etc. Now, in 2014, after growing as a band as well as musicians, EXMORTUS have come to that point in their career, in which they can honestly say to sound as their own band – and no other really. The band’s past Thrash and Death Metal roots have pretty much been left behind (for the most part anyway), while the band has evolved and added a huge amount of technical playing into their own musical approach. It’s actually kinda tough to pinpoint the exact style where EXMORTUS would fit in like a rubber glove on a coroner’s hand but one thing however is certain: EXMORTUS’ 3rd album, titled "Slave To The Sword", released on their new home Prosthetic Records, is – hands down, absolutely their best work to date. What I like about this album, EXMORTUS seem to have a very unbiased approach to their stuff: they really don’t care for any restrictive genre categories but basically churn out the kind of stuff that comes very naturally for them. In a way, it could be said that EXMORTUS have never had so much of Power Metal-ish / Neo-classical style within their technically advanced Metal. Guitars’ dominating presence on "Slave To The Sword", is unquestionable. Both guitarists Jadran and David, are able to kick off some really technically challenging, true virtuosity-like shredding riffs, clever rhythms and extensive solos through the songs on this very pleasing sounding record, none of them going too over the top with their 6-stringers but sort of understanding well what it takes to write a decent song that stands out – and stand out well enough to please a bunch of people out there. As much as "Slave To The Sword" seems to be a heavily guitar orientated record, it’s also as much a collective work of 4 individuals who seem to know way too well that this very record in question is the band’s 3rd full-length studio album already – and the songs just have to stand out. It’s actually as simple as that. Otherwise the road may be too short for them; there’s even no option to fail this time. Bearing this in their minds, EXMORTUS sound amazing, fully ready and armed for fighting their way to the hearts of many Metalheads. And that’s what they indeed do. With Jadran’s semi-dry and raspy grunts, overall added with simply a superb musicianship (just tune your ears for example for a cover song, which is no less but Beethoven’s ‘Moonlight Sonata – Act 3’) that they possess inside their own camp, makes it all possible for them to raise some musically challenging bars constantly higher and higher in the future, from release to another. EXMORTUS are back in the game – and they are going to be the last men standing after a gong ends the final round. EXMORTUS can be reached at: www.facebook.com/exmortusofficial, label: www.prostheticrecords.com